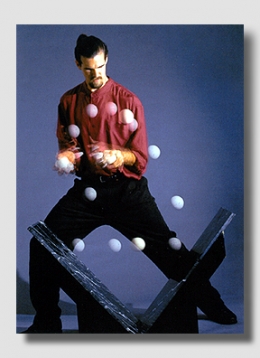 Greg's full show is a combination of high-energy juggling, clean comedy, and unique performance pieces. For 45 minutes from beginning to end it astounds audiences everywhere, mixing impressive feats, rapid-paced wit, and the pure beauty of motion. Greg also performs an additional 15-minute trailer show using the same combination of format to supplement the main show, if desired. These shows are suitable for all ages.

For corporate events and revue shows, Greg offers shorter segments, which can include pieces from his main show and/or his other original routines. He can work with the producers to select the best combinations.

In an effort to redefine people's preconceptions about juggling, Greg Kennedy fuses logic and creativity to synthesize new forms of juggling manipulation. In the early 1990's, Greg spent several years working as a professional engineer, in addition to his juggling career. His fascination with the geometry and physics of object manipulation lead him to ground-breaking work with original apparatus, expanding the realm of juggling. "He is a visionary who can see the possibilities in props and movement that are obscure to the masses," writes Bill Giduz, Jugglers World magazine.

Greg presently balances his performing career with a pursuit of juggling innovation, experimenting with new shapes and surfaces as well as traditional skills.

Greg has performed in theaters, resorts, nightclubs, casinos and on cruise ships. His show has amazed audiences on five different continents and most of the world's seas.

His work has been featured in esteemed productions, such as the Washington Operaâ€™s Pagliacci, Luma: Theater of Light, and Saccade.

Greg is often hired to create a powerful spectacle for company presentations, launches, and celebrations. He has delighted corporate clients including Sony, AOL, Cisco, Sunoco, and countless others.

Media credits: multiple television appearances including The Tonight Show with Jay Leno, cover and feature articles in Jugglers World magazine and Juggle magazine, and special recognition in the book 4000 Years of Juggling, the Art and its Artists.