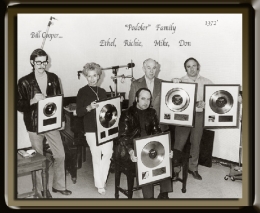 Don Podolor, upon graduating from U.C.L.A., went into the entertainment business with his brother Richie and they built American Recording Company on Sunset Boulevard in Hollywood. Soon it became one of the hottest studios around, and one hit after another came out of the studio. Don started American Entertainment Agency to book the acts that they recorded. Up to now Don has booked over 35,000 shows and concerts, and his brother Richie has become one of the most acclaimed record producers in the entire world. Most of their hit records became either gold or platinum, and just recently they received a Diamond Album for sales of over 15,000,000 for the Forrest Gump sound track album. Several of their songs were in the album including "Joy to the World" by Three Dog Night which was a former record of the year that they produced.

Don has produced five world-wide internet concerts including Paul McCartney in Liverpool, and Willie Nelson in Holland. In the decade of the 70's they were the number two record producers in the world. A few of the groups they produced were Three Dog Night (27 hits), Steppenwolf, Iron Butterfly, Bobby Kimball (Toto), Alice Cooper, Poco (Randy Meisner and Timothy Schmidt joined the Eagles as leads), Redbone, Teddy Neeley who played the lead role "Jesus" in the movie "Jesus Christ Superstar.”  They recorded and worked with Fleetwood Mac, Tom Petty, The Beachboys, The GoGo's (Belinda Carlisles' solo album), Rod Stewart, Kenny Rogers, Randy Newman, Heart, John Denver, Elton John and the Beatles. They also helped to launch the career of Elton John when they took his song "Your Song" and put it in a Three Dog Night Album. One of Don’s close friends and business associates, Russ Reagan, signed Elton John to his label, Uni Records. The rest was history. The next group Russ signed was Neil Diamond. The songs from the American Recording Studio catalog have been in hundreds of movies and TV shows.

For years Don was the entertainment advisor for the National Indian Gaming Association (NIGA) in Washington, D.C.  Don worked closely with the chairman of NIGA, Rick Hill, for ten years.  During that time, Don probably booked more Native American Casinos than any other agency. Some of Don's Native American acts that he managed and booked were Charlie Hill (comedian and head writer of the Rosanne Show), Redbone (#1 Native American band in the world), Floyd Westerman (singer, entertainer, and movie star who also played the chief in the film "Dances with Wolves").

Don was the manager of “Otis Day and the Nights” from the movie "Animal House." Don was also the agent for Mike Curb who became the Lt. Governor of California and started his own record label, "Curb Records" which is one of the biggest independent record labels in the world. He has acts like Hank Williams Jr., The Judds, Leanne Rimes, Tim McGraw and many more. Don is currently the manager of Elvis Presley, Jr., who is the actual son of Elvis Presley, and Don says of all the superstars he has worked with, Elvis Presley, Jr. is probably the best yet.

Now at FCE, Don is taking on the role as a specialist overseeing talent acquisition and development.