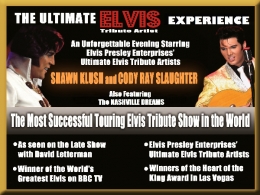 “This show has a 5-STAR rating with Ticketmaster!”

This show package consists of up to 3 of the world's absolute BEST ELVIS TRIBUTE ARTISTS that have a history of hard ticket sales!

THE ULTIMATE ELVIS Tribute Artist EXPERIENCE is the most successful touring Elvis tribute show in the world!  It is an amazing era by era tribute to the King of Rock-N-Roll, ELVIS PRESLEY, starring with up to three of the best Elvis tribute artists in the world, SHAWN KLUSH, DEAN Z, and CODY RAY SLAUGHTER!  Each artist can also be booked separately to accommodate almost any venue size and budget.

SHAWN KLUSH: Born and raised in the small coal-mining town of Pittston, Pennsylvania, Shawn’s love for music led him to begin imitating his musical idol, Elvis Presley.  He performed in the famous Poconos region followed by a tour of Canada where he entered and won the $5,000.00 prize in the “Worldwide Elvis Competition” in Montreal.  This caught the attention of the award-winning Las Vegas show, “Legends in Concert,” where for many years he starred as ‘Elvis’ in their Myrtle Beach, Las Vegas, Branson and Atlantic City show rooms.  Each January he stars in the “Elvis Birthday Tribute Tour,” an extravaganza with Elvis’ own musicians, singers, and friends, in major venues in multiple cities.

Shawn has released 5 CDs. He has performed with Elvis’ closest friends, musicians and singers such as JD Sumner and the Stamps Quartet, The Jordanaires, The Imperials, DJ Fontana, Charlie Hodge, Jerry Scheff, The Sweet Inspirations, Joe Guercio, Jerry Schilling and Joe Esposito. He portrayed Elvis in the hit TV miniseries “Shake, Rattle and Roll” which aired on CBS and VH1.

On Elvis’ 70th Birthday, Shawn became grand champion at the $25,000.00 “World Elvis Tribute Artist Competition.” He then received “The People's Choice Award” from Gibson Guitar Co in Nashville for “Best Concert Elvis.” Shawn was then named the “World’s Greatest Elvis” by 6.5 million international viewers on BBC1 Television in the United Kingdom. Finally, on August 16th, on the 30th anniversary of Elvis’ passing, Shawn was named the ‘First Ever’ “Ultimate Elvis Tribute Artist” by Elvis Presley Enterprises in Memphis TN. Shawn has record breaking performances in the US, Switzerland, Canada Australia, the UK and South America. He was named "Worldwide Ambassador of Elvis" at the Las Vegas Hilton where he headlines the annual the Las Vegas Elvis Fest, celebrating Elvis’ historic Las Vegas Performances.

Shawn was a featured performer on the Late Show with David Letterman performing to over 5 million viewers with the entire CBS Orchestra on Network Television and in 2016 will portray Elvis in the new HBO series called Vinyl, produced by Martin Scorsese and Mic Jagger.  Shawn Klush is “The Closest Thing to the King in Concert.”
CODY RAY SLAUGHTER:  Cody is hailed as one of the most talented, young Actors, Singer and Elvis Tribute Artist in the country. Born and raised in Harrison, Arkansas, gateway to the beautiful Ozark Mountains, Cody Slaughter began entertaining at the young age of 13.  A true Southern boy, Cody’s true passion for Elvis’ music and memory has directed his career path.

Cody has performed all across the country as "Elvis" in the traveling production of the Tony Award-winning sensation "Million Dollar Quartet," and was nominated as best featured actor for his role.  Slaughter has performed in many theaters in Branson, MO, such as Tony Roi’s Elvis Experience, Legends In Concert, 50’s At The Hop and The Liverpool Legends as well as in Pigeon Forge, TN where Cody was the featured entertainer at The Tennessee Shindig for over a year at the young age of 17. Cody also appeared on MTV’s “My Super Sweet 16” and "Late Night with David Letterman." Slaughter has performed at special events, corporate functions, and entertainment venues throughout the United States, Canada and the UK.  His uncanny portrayal of Elvis Presley exhibits his amazing love for who he calls, “the greatest entertainer of all time.”

Among some of Cody’s most exciting accolades were winning The People’s Choice Award during Elvis Week 2008. In July of 2011. At the Las Vegas Elvis Fest, Cody received The New Horizon Award for "Best New Elvis Tribute Artist." The award was given on the same stage where Elvis made history at the Las Vegas Hilton.

Cody Slaughter has the raw talent and passion that Elvis himself exhibited when he first started. Apart from his tribute to Elvis, Slaughter has a budding career as a country music singer and songwriter. But in spite of his repertoire and building a reputation with his own music Slaughter still says, "My greatest joy is when I'm paying tribute to Elvis, his music and keeping his spirit alive with his fans."

DEAN Z (3 Elvis Show with Dean Z):  In 2013, Dean decided it was time to go after the title of Ultimate Elvis Tribute Artist. Sanctioned by Elvis Presley Enterprises, Inc. The Ultimate Elvis® Tribute Artist Contest™ involved hundreds of Elvis tribute artists competing in 29 preliminary events all over the world for an invitation to the Ultimate Elvis® Tribute Artist Contest™ Semi-Finals in Memphis during Elvis Week.Dean nailed down a trip to the Semi-Finals by winning the Preliminary held during the Rockin’ Elvis Fest” on March 17 at the Pala Casino, in Pala, California. He and the 28 other semi-finalists competed for the top ten spots on August 14th with the Finals coming three days later.Dean performed a version of "Jailhouse Rock" that had the crowd worked into a frenzy. He brought the house down, and was soon presented with a championship belt, the title of Ultimate Elvis 2013 from EPE, a check for $20,000 and tens of thousands of new fans.
The year 2014 was a banner year for Dean, who received the Heart Of The King Award in Las Vegas at the former Las Vegas Hilton, on the same stage the Elvis himself performed over 700 shows during the 1970’s. He also fulfilled a childhood dream of performing for the flagship Legends In Concert production in Las Vegas at the Flamingo Hotel and Casino.

Following the worldwide success, Dean saw his career continue to skyrocket as several lifelong dreams came to fruition. In addition to being one of the most sought-after E.T.A.s in the country, Dean also became an official host during the annual Elvis Week celebration in Memphis in 2015, 2016 & 2017, serving as an ambassador to Graceland and the Elvis Presley estate.

"Working so closely with Graceland and the Elvis Presley estate as a direct ambassador to Elvis Presley’s brand means the world to me, both as an entertainer, as well as a lifelong Elvis fan," he said. "But to work hand-in-hand with the estate, that's a goal I've had since the beginning of my professional career."

Being an official host for Elvis Week and working together with EPE gave Dean the chance to tackle several media projects. This included a massive, world-wide internet ad campaign for the global electronics company Philips called "A Little More Action" to help promote living a healthy lifestyle. Along with Keith Hart, an amateur Elvis Tribute Artist, Dean co-starred in the short film which highlights Dean training Hart to fulfill his lifelong dream of performing on stage as the King of Rock and Roll.