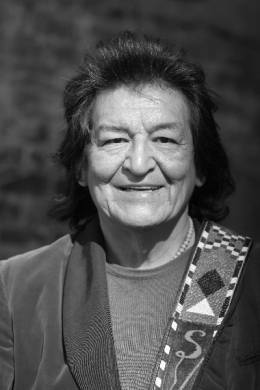 Curtis “Shingoose” Jonnie, has spent his entire professional career in the entertainment industry, and brings vast experience as an artist, booking agent, and show producer. Curtis, who hails from Winnipeg, Manitoba, Canada, is also a member of the Roseau River Anishinabe First Nation.

During his youth, Curtis was placed in a missionary home in Steinbach, MB from 1950- 1960.  Curtis’ love for music was developed through singing gospel hymns and studying the piano.  In 1960 Curtis moved to Fargo, ND to join his mother.  While there in high school, he joined the pop rock band “Bobby Vee and the Shadows,” and spent the next 15 years learning the business and playing in other rock bands across the USA.  He ended up in Washington, D.C. with the Roy Buchanan Blues Band and in 1969 formed “Puzzle.”  He signed a record contract with ABC Records.  Eddie Kramer of Jimi Hendrix fame produced it.  From 1969 – 1972 Curtis got a front row seat and education of the rock-n-roll industry meeting all the greats like John Lennon, Jimi Hendrix, and many others associated with Eddie Kramer.

In 1973 Johnny Yesno, host of CBC’s “Our Native Land” heard some of Shingoose’s songs that presented a strong Native identity; culturally, politically, and personally.  He recommended that Shingoose be featured at the Mariposa Folk Festival in Toronto, Ontario, Canada.  This began a forty year career as a folk singer-songwriter performing at many major folk festivals and Aboriginal music shows across Canada and the US.

From 1974 and on, Curtis has served on numerous granting Boards, performing arts committees, etc. (i.e. At the Manitoba Arts Council he helped lobby for, and created the Artists in the School Program.  At the Canadian Academy of Recording Arts and Science, he helped create the first national Best Music of Aboriginal Music Category for the JUNO AWARDS.  At the Manitoba Aboriginal Recording Association, he served as an Aboriginal Music Advocate supporting Educational programs and business development.).

In 1975 Curtis was signed to Glen Campbell’s music publishing company “Kay Tee Kay Music” as a writer. This association with a true country music superstar gave Curtis an up-close view of concerts, touring and introductions to many other country greats.

Curtis also partnered with Don Marks in Native Multimedia Productions from 1982- 2002 and brought Native TV to national TV networks (INDIAN TIME, on CTV, 1988, 2002, GLOBAL, BRAVO, PBS in the US).

In recognition of Curtis’ success and contribution to the music world, he was inducted into the Manitoba Aboriginal Music Hall of Fame on September 22, 2012.  To this day, Curtis still continues to promote Aboriginal culture and help in the development of a vibrant Aboriginal Music community.

Drawing on his extensive show biz contacts and experience, Curtis Jonnie has joined First Class Entertainment Inc. and will operate a branch office in Winnipeg, Manitoba, Canada serving the International Entertainment Venue Market with an additional focus on Indian Gaming, both in the US and Canada.