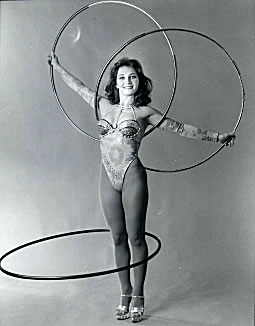 Born in Russia in 1974 to a famous circus family, Anna Jack spent four years working in the Moscow Circus School before immigrating to the United States. Considered one of the best hoola hoop artists in the world, Anna has performed with the Big Apple Circus, The Moscow Circus, and has been on Broadway in "Circus Diva" and in the musical, "Barnum".

She has appeared on television shows including "E! Entertainment" and "Late Night With Conan O'Brien", and at a number parties and trade shows for various companies including Microsoft, McDonald's, Oldsmobile, George Lucas, and Chrysler. She can also be seen in a national ad campaign for SONY. Currently, she is performing her new "Slinky Circus" currently being performed in theaters and universities throughout the USA.