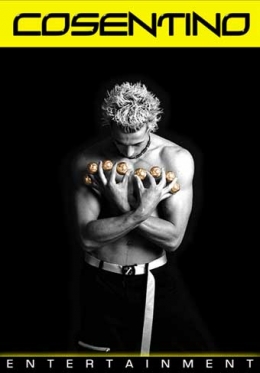 A Dynamic Fusion of Magic, Dance and Illusion

Be prepared to take a trip into the realms of your imagination with one of the world’s most unique and talented illusionists - Cosentino.

At only 20, international illusionist Cosentino has already achieved what most performers twice his age have only ever dreamed of. He is an Australian Champion Magician; attainting first place at the Adelaide Magic Convention in 1997 and at two consecutive Australian Conventions of Magicians - Sydney (1998) and Melbourne (2000).

In his own award-winning style, Cosentino fuses traditional slight of hand magic and grand illusion into novel and original presentations. He escapes the boundaries of the past and performs some of the most original and funky effects witnessed today.

Cosentino’s professional career began in 1997 when he was just twelve years old. He started by presenting his illusions to friends and family, but by the end of the year he had refined and developed his show to a level that ultimately won him first prize at the Adelaide Magic Convention.

Through constant perseverance, shear determination and a seemingly endless well of inspiration and imagination, Cosentino is now fulfilling his childhood dream. With his powerful world-class illusions, he now makes the impossible seem possible….as audiences in Australia and overseas have witnessed.

His impeccable technique and commanding stage presence set him apart from the rest. Even the directors of the world renowned Cirque du Soleil have shown a keen interest in his unique and varied performance skills.

But don’t be fooled….. a performance by Cosentino is far more than just a magic show. It’s a dynamic mix of the unexpected….dazzling magic and illusions blended with energetic dance, clever mime, audience participation, humour and many surprising twists.

Cosentino’s productions are a quantum leap forward in the art of magic of magic and illusion. The shows have edge, variety and vitality that draw the audience in with each effect. From beginning to end, the action never stops and audiences of all ages become enthralled.

Cosentino’s originality and innovation have earned him the respect of his peers and clients alike. He is a pure showman… and his made-to-measure productions are amongst the most powerful, riveting and sought-after in the entertainment industry today.

A performance by Cosentino is an entertainment spectacular…. AN EVOLUTION IN ILLUSION !