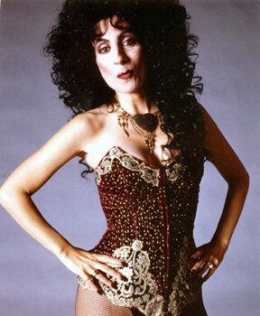 Heidi Thompson is the premier CHER impersonator with credits that include guest-starring roles on national sit-com “The Nanny”, NBC Variety Show “Friday Night”, "The View", and "The Ellen DeGeneres Show".  Ms. Thompson has also starred in the award-winning show, “Legends In Concert” at the Imperial Palace Hotel in Las Vegas since 1990.  Legends In Concert has been at the Imperial Palace for over thirteen years and has multiple touring companies around the world. To date, Heidi has been the only CHER impersonator in the entire company, which employs up to ten impersonator shows at one time.  Most recently, Heidi has been on the road promoting Nickelodeon’s new television network, “TV Land,” which hosts reruns of “The Sonny & Cher Show.”

The highlight of her act includes an audience participation in which Heidi brings an unsuspecting male onto the stage, places a “Sonny Bono” wig upon his head and makes him sing “I Got You Babe” with her.  She includes a wealth of improvisational skills that can be tailored to the demographic and occupational category of your client.

Lastly, her costumes and patter can be made to fit into any rating from “PG to R.”  In other words, from evening gown to G-string and tattoos!

Whatever the audience, Heidi Thompson will give them a show they will never forget, and neither will you!