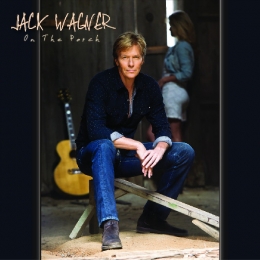 During a career that has spanned over 30 years, Jack Wagner has proven himself to be, not just a triple, but a quadruple threat. Though most well known for his work in television, Wagner has achieved great recognition as an accomplished stage actor, musician, and holds the rare distinction of being a scratch golfer.

Musically, Wagner is gearing up to release his long-awaited sixth full-length album,On The Porch. A collection of 12 original songs, all written or co-written by the Missouri native, the album takes Wagner back to his Americana roots. On The Porch, produced by Dave Darling, has an authentic down-home feel brimming with textured acoustic instrumentation (slide guitar, dobro, mandolin, etc.). The collaboration resulted in a thoroughly gratifying 41-minute listening experience.

In 1983, after graduating from the University of Arizona with a Bachelor of Fine Arts degree, Wagner landed the starring role on the number one daytime series,General Hospital. Portraying rocker Frisco Jones afforded him the opportunity to record songs for the show, which eventually led to a multi-album deal with Quincy Jones’ Warner Bros. imprint, Qwest Records. Wagner’s debut LP (released in 1984), spawned a massive hit single in the title track, “All I Need.” He would go on to release four follow-up albums, generating four more top 40 singles.

Wagner’s draw to the theater led him to star in two widely heralded national touring productions, first as Tony in West Side Story in 1987, and next playing Danny Zuko in Grease in 1988. His work in theater culminated in 2000 when he was cast in the title role(s) of a lifetime in the Broadway production of Jekyll and Hyde.

In the 1990’s Wagner jumped to primetime television as Dr. Peter Burns on the hit show Melrose Place where he spent five years on the set as, not only an actor, but directing episodes as well. More television opportunities followed, including a nine-year run on the huge national and international hit series The Bold and The Beautiful, numerous guest starring roles on shows such as Hot In Cleveland, Castle, Monk, and 16 movies of the week for which he was producer on several of them. Wagner was also featured in Season 14 of Dancing With The Stars.

As a golfer, Wagner has emerged victorious in six club championships at his home course in Los Angeles, The BelAir Country Club. In 1990, partnered with John Cook, he won the Pebble Beach AT&T ProAm event. As well, he is a two-time winner of the American Century Celebrity Golf Championship which takes place each July in Lake Tahoe and is broadcasted live on NBC.

Also philanthropical, Wagner is the National Celebrity Ambassador of the Leukemia and Lymphoma Society, which benefits from the annual Jack Wagner Celebrity Golf Classic. Wagner has spent many tireless hours for this charity, fueled by a personal connection to the disease, having lost his father to blood cancer in 1990, and his brother’s leukemia diagnosis in 1999.

Jack is currently starring in "When Calls The Heart" on Hallmark, and is playing the charactor Inspector Bill Avery in its 2nd season.

Equally comfortable on screen, stage, singing and playing guitar for a live audience, or lining up a 30-foot putt, Jack Wagner is a fearless performer just now hitting his stride.