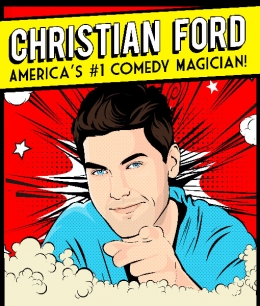 Christian Ford (#MagicMan and party boy) -- who's been praised for his “intelligent approach” (Broadway World) and hailed as “the next generation of magic” (94.1 Mix Las Vegas) -- has swiftly raised to notoriety for his refreshing take on non-traditional magic in which he pokes fun at himself, his craft and his honored party guests (YOU!).

To date, with his critically-acclaimed, touring comedy and magic show, Christian has performed to sold out audiences world-wide. He's headlined at The Venetian, Treasure Island, and Hooters Hotel & Casino in Las Vegas, performed at the world-renowned Dolby Theater in Hollywood, co-starred in an international, touring, comedy show featuring Wayne Brady, appeared on “Comedy After Dark” (on the same stage made famous by Elvis Presley) and starred in a successful, five month engagement at the Jon Lovitz Comedy Club at Universal Studios, Hollywood. He's appeared on “America's Got Talent” and special guest starred on the Golden Globe winning FOX comedy series “Brooklyn Nine-Nine” and the "Dante Night Show". Christian is also a member of The Academy of Magical Arts and The Magic Castle in his home state of California where his party never ends.