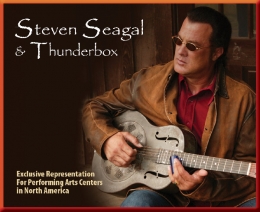 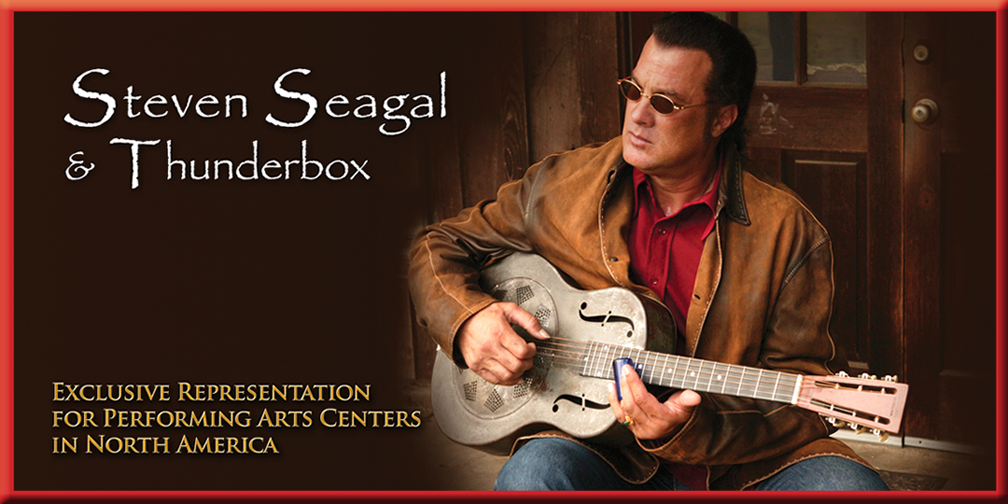 As featured at the APAP & IEBA Conference.  "Meet & Greets" included after show.  Also available is an artist-in-residency "Martial Arts Exhibition for Youth."

Steven Seagal has been an accomplished musician for many years now, in fact you might be surprised to discover that Steven has actually been a musician a lot longer than an actor; he got his first guitar at the age of 12 and has been playing the blues ever since.

Steven has honed his craft over the years sharing his love for the blues and jamming with the most prolific blues legends in the industry. BB King, Bo Diddley, John Lee Hooker and his greatest influence, Clarence “Gatemouth” Brown, who sadly recently was taken from us as a result of injuries suffered in Hurricane Katrina, are all among those who Steven has jammed with and also shares a common bond – the blues.

But it was not until Steven’s mother influenced him to “let the world hear his music”, that he released his first album, "Songs from the Crystal Cave," which was a top seller in European markets and features a combination of styles including blues, pop, jazz and reggae, with a classic harmonica solo by Mr. Stevie Wonder.

Steven is a purist when it comes to the blues and he remains true to its roots which is evident in his 2007 follow up release ”Mojo Priest,” which celebrates the power of many of the musical influences that have compelled Steven to write and bring the art of storytelling to his songs.

Steven is an accomplished guitar player and his style of classic and modern blues is personified in a way that only Steven Seagal can accomplish.  Even the amazing BB King was quoted as saying “Steven is great at Guitar.” Stevens natural talent and commitment to capture blues in a traditional and meaningful manner is evident in the music he writes and plays.  A little known fact is that Steven has one of the most comphensive and historical collection of Blues guitars in the world.

In 2007 Steven completed a highly successful, sold out, world tour culminating in the filming of a live DVD at the Shepherds Bush Empire in London, England that will hopefully be released in the future.

In 2014, Steven Seagal & Thunderbox played live across Europe with their Blues Music Tour.

Into the future, Steven is currently working on his 3rd studio album.