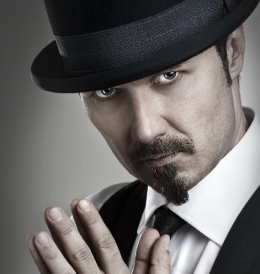 Can perform in English and Italian.

Musician, illusionist, writer and director, Francesco Tesei started working on performing arts very early. At 21 he was contracted by Costa Cruises and he was the youngest artist to perform a one-man show in the whole company. For 15 years he worked all around the world, visiting more than 30 countries with his grand-illusions show.

Since 2003, he started collaborating with other artists, as artistic director and creative consultant, such as English magician Jonathan Hawley and Italian illusionist David Cat's (recently nominated "Princess Cruises' Best Magician of the year").

In 2005 he began studying psychology in the entertainment, undertaking personal paths which lead him to the Milton Erickson Institute and to a Master in NLP (Neuro Linguistic Programming).

In 2007 he abandoned illusionism and he created his first show as a mentalist. One year later, he produced his first DVD, Mind Juggling, which sold thousands of copies, and he started touring theatres in his country.

Since 2010 he is often invited on national television to perform his contemporary mentalism, and as an expert in communication.

In 2012 he published his first book, which can be found in any Italian bookstore. Currently, Francesco Tesei's work is mentioned in several prestigious books on mentalism, and he's referred as "the most important Italian mentalist." He lives near Bologna, in Italy, constantly reading his wife's mind, and playing chess with Albert and Milton, his fancy rats.