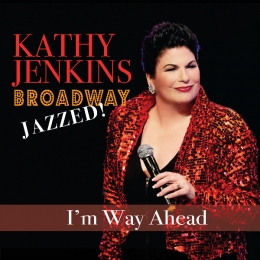 "Kathy Jenkins possesses one of those voices that literally sends chills up and down your spine...Get ready for some goosebumps!" - Dave Darlington, BASS HIT RECORDING, New York, NY
"Kathy Jenkins is an amazing singer with an incredibly warm, expressive and beautiful voice! She brings a uniqueness to each song with that special quality that is simply breathtaking! What a privilege to be associated with this wonderful project!" - Yaron Gershovsky, Musical Director, The Manhattan Transfer
"...a superb jazz singer in her own right." - JazzTimes
"...a world class talent." - Dr. Touch, Jazz Observer

Singer, actress and BIG BAND vocalist, Kathy Jenkins developed her lush singing style performing in hundreds of concerts across America and Europe with The United States Air Force Band. The possessor of a big sensuous voice, Jenkins has recorded three CD’s that have hit high notes with the critics. No less an authority than Jazz Times called her a “superb jazz singer.”

Born in St. Paul, Minnesota, Jenkins grew up listening to her father’s beautiful Irish tenor and her mother’s torch versions of Judy Garland songs. She knew from the age of four that she wanted to sing, and her earliest “performances” were to construction workers in her neighborhood to coax them to buy from her lemonade stand!  More recently, Kathy electrified audiences with her stage presence and vocal dynamics as a guest vocalist with the Moscow Jazz Orchestra.  Clubs and Festivals include Dizzy's Club Coca-Cola in New York City, Blues Alley in Washington D.C., Chris's Jazz Club in Philadelphia, Jazz & Caz Festival in Cazenovia, NY Wigan Jazz Festival in England Sochi Jazz Festival in Sochi, RU Moscow House of Music in Moscow, RU to name a few.  She also performed with the Orchestra in Red Square at a 120th year celebration of GUM, a landmark building now a shopping mall, across from the Lenin Mausoleum.