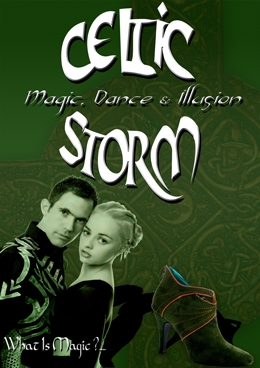 "Michael Flatley would not hesitate to sign them up. They will not disappoint any audience, of whatever age" - Joy David - The Stage
"Imaginatively presented big box illusion act.....a big hit [...] An absorbing fusion of magic and dance" - Mark Ritchie - The Stage
"Superb illusion act, Celtic Storm, were amazing performers with an Irish dancing theme to link all their tricks. Also the quick costume changes were sensational." - Sue McDonald - Bridgwater gazette

The team: Martin & Kerry Jo Gardiner have been working in the entertainments industry for many years, starting out as Resident Entertainers for Warner Holidays, and progressing to Entertainment Managers. They have a wealth of knowledge in their field and know what the customer wants to see. After meeting in November 2002, Celtic Storm was founded shortly after. In 2004 Celtic Storm performed exclusively 7 nights a week for the renowned Wheeltappers and Shunters Club Benidorm, on the bill amongst artists such as Frank Carson, Stan Boardman, Mick Miller and Mike Reid to name but a few. They have recently returned from a Mediterranean cruise performing on board P&O’s luxury liner, the Oceana and have completed 3 highly successful summer seasons touring some of Britain’s top holiday centres and hotels.

The show: Celtic Storm is an illusion and dance spectacular, set to the moving and powerful backdrop of Celtic rhythms and beats. This is a fast paced show with excellent costume changes, so quick you won’t believe your eyes. The production consists of outstanding stage illusions and is filled with up close magic that will deceive the mind. Magician and assistant will amaze you with superbly choreographed Irish dance routines with music taken from Lord of the Dance, Riverdance, Celtic Tiger and much more.

The future: With two complete shows Celtic Storm would be an ideal show for long term contracts such as cruise ships & cabaret venues with repeat audiences. Celtic Storm’s new material is even more colorful, fast paced and inventive than before featuring over 20 different costumes in one performance! Martin & Kerry are looking forward to more new and exciting adventures with there second 45 minute show, now complete. Celtic Storm now has over 90 minutes of stage performance, which would be suited to all types of Entertainment venues from holiday centers to theatres; they will guarantee your audience have a night to remember.

Both Martin and Kerry have outstanding presence on stage; they are trained dancers with the I.D.T.A and also have vast experience in Irish, contempory & commercial dance.

Celtic Storm has also proved very popular at corporate events and special functions. They are certainly a perfect choice to make any St Patrick’s Day party one to remember!