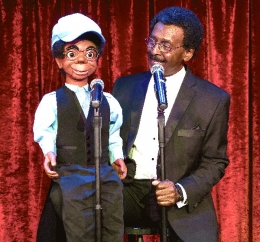 "Saw me open and count my rings." That's the answer Willie Tyler's little buddy, Lester, gives when asked how old he is.

Willie began to see Ventriloquists like Paul Winchell and Senior Wences almost nightly on TV. He started performing in Detroit, Michigan at the age of ten. He took a correspondence Ventriloquist course from Popular Mechanics magazine.

Between school and delivering newspapers, Willie would find time to perform in variety shows and talent contests. This is where he developed his craft. After four years in the U.S. Air Force Willie returned to Detroit and a few years later signed with the Motown Record Corporation. For the next eight years he and Lester toured with all the Motown greats (Smokey Robinson & The Miracles-The Supremes-The Temptations-Stevie Wonder-Marvin Gaye etc.)

Since those days of yesteryear this comedy team has performed in front of audiences, in all fifty states and overseas.

They have also shared the stage with such greats as Frank Sinatra, Sammy Davis Jr., Diana Ross, Stevie Wonder and Dolly Parton,

Their TV credits are impressive. They include appearances on the Tonight Show (NBC) ABC Weekend Specials, "Pacific Blue" (USA Network) "In The House." (NBC)"Parenthood" (WB Network)"Primetime Country" and "The Statler Brothers Show" (TNN) and numerous Ventriloquist Specials and those unforgettable Mc Donald's commercials.

Lester is a humorous little fellow and he sings pretty good too! Although he was born in the woods and worked his way out. Once you have seen him in action you will never forget this little "chip off the old block!"