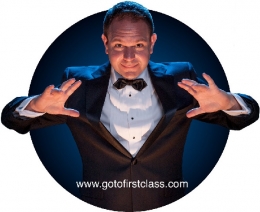 "High energy entertainment that is interactive!" - Laughs Across America
"Is he a magician who does comedy or a comedian who does magic? You be the judge. Either way, Robert Strong's a riot, check him out." - The Las Vegas Sun
"Robert Strong is an edgy comedy magician who has appeared all over the world and is one of the most popular performers working." - I Love Vegas - The complete visitor guide
"Robert Strong is a bizarre and edgy comedy magician who has been featured on national television." - Las Vegas Review Journal

Robert Strong – The Comedy Magician has been entertaining audiences since 1985. He has performed on national television, in all 50 states, in 47 different countries, and twice at the White House. He was twice voted San Francisco’s “Best Comedian”; and three times voted San Francisco’s “Best Magician”. He’s a 10-year artist in residence at The Smithsonian, the resident magician at Google, and he’s the host of Comedy Talks: Conversations with the Legends of Comedy. One of the highlights of his career was opening a number of times for comedy legend Robin Williams. You can see his recent TEDx San Francisco talk here: https://youtu.be/TfIR8TaWrnM

Robert creates a custom routine for every audience.