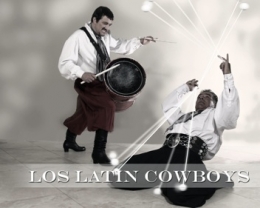 Los Latin Cowboys, the acclaimed funny gaucho duo, was founded in November of 1984 by creator and producer Jorge DiPaola. From the time of founding, this stellar act has not stopped working. Since 1992, in Las Vegas, they have performed in some of the world’s greatest shows. Los Latin Cowboys have graced the stage to rave reviews at some of the most famous hotels such as the Flamingo, The Plaza, The Sands, The Dunes, Bally’s, The Sahara, and The Riviera. They starred in one of the longest running shows in Las Vegas, “SPLASH”, for 8 years.

Los Latin Cowboys have toured Bogota, Colombia, as the comedy stars of “MAGIC, ILLUSION AND HUMOR,” for 18 sold out Performances. In current news, Jorge DiPaola is producing a new show that will open in Aruba the summer of 2011 called “Enchanted” in which Los Latin Cowboys will hold a starring role.

Los Latin Cowboys Gaucho-Comedy act is the top act of its kind, for every audience.