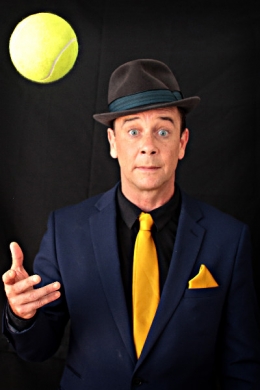 "You were magnificent a consummate professional, your judgement and timing of the audience was spot on. We relied on a big performance from you and you delivered on that expectation. Well done and thanks!" - Leighton Langley, SovNet
"As the main producer of The Crimson Goat Cabaret Club at Ormond Hall in Melbourne, I have used the wonderful services of Nick Nickolas on four occasions, in front of a sophisticated audience of a wide age range. Nick always delivered a very entertaining performance and the feedback after each of his shows was excellent and whatâ€™s more Nick is really easy to get along with. Highly recommendable.
" - Jack Levi aka Elliot Goblet
"Nick was both hilarious and very, very clever. No-one stopped laughing from the moment his act commenced until it finished other than the occasional pause to wonder â€œhow did he do that.â€ With a mixed audience he managed to thoroughly entertain without offending anyone-an achievement in itself." - Gail Clews, G.J.Gardner
"More than a Comedian, Nick's a One Man Entertainment Event." - Gulf News

Nick travels light - no long set up, no difficult lighting, and no problematic music cues. Audience participation at its best with awesome tricks and cracking hot gags.

He has 2 x 45 shows featuring magic/juggling or a combination of both.

Nick also offers an afternoon ‘chat/magic’ show where he shares funny stories and antidotes about his travels whilst combining close-up/parlour magic, then teaches the audience a trick or two to take home as well.

Nick Nickolas has been performing professionally as a magician, juggler and comedian worldwide for over 20 years gaining recognition and awards from his audiences and peers alike.

Nick is highly skilled and very funny, honing his skills in a phenomenal variety of venues globally.

Whether he is performing magic, juggling or just chatting away audiences warm to his likable personality immediately resulting in fantastic shows and fun times had by all.

Nick has been performing on cruise ships now for a couple of years with great success; he has 2 x 45 shows featuring magic/juggling or a combination of both.

Nick also offers an afternoon ‘chat/magic’ show where he shares funny stories and antidotes about his travels whilst combining close-up/parlour magic, then teaches the audience a trick or two to take home as well.

Audiences are either on the edge of their seats in anticipation, leaning back and laughing, or somewhere in-between.

Nicks’ skill with tennis balls, rope, sausages, and cards has seen him perform for the Harlem Globe Trotters, open up for George Best and he’s the only act ever to support the Dali Llama.

Audience participation at its best, crack hot magic and crack hot gags, Nick’s a quality magic act for any situation.

As a comedian Nick is very "quick on his feet" which makes for a great compere. He’s constantly aware of his surroundings therefore ready to cover those, oh so unplanned glitches at the drop of a hat, to make any event run smoothly.

His hilarious signature piece where he juggles a variety of fruit simultaneously disrobing from his hat, tie, jacket and shirt while cracking jokes twenty to the dozen and eating the apple.

“More than a Comedian, Nick’s a One Man Entertainment Event.” Gulf News

Nick travels light- no long set up, no difficult lighting, and no problematic music cues.

Nick Nickolas has been entertaining on cruise ships for a couple of years now with great success, gaining prodigious comments from staff and passengers alike.