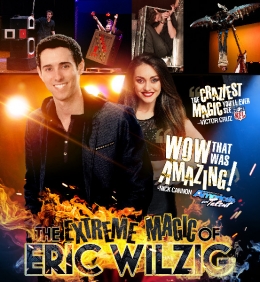 "Wow, Eric, that was AMAZING! How did you do that?" - Nick Cannon, Celebrity Host of NBC's "Americas's Got Talent"
"The next rising star in magic! A CAN'T MISS WONDER!" - Simon Lovell, International Producer
"You've made magic COOL! You blew me away!" - Carla Marie, Z100 Elvis Duran Radio Show
"Your performance and illusions were absolutely INCREDIBLE!" - Mark Ecko, Mark Ecko Enterprises
"If you're looking for a show with unique illusions, escapes, and stunts...THIS IS IT!" - Shaquille O'Neil, former NBA All-Star Player

Considered the HOTTEST RISING STAR in the magic industry today, award-winning illusionist Eric Wilzig has captivated audiences worldwide with one of the LARGEST touring illusion shows in the country! Combining an explosive mix of cutting-edge illusions, daring escapes, outrageous stunts, cool music, and special effect lighting, The Extreme Magic of Eric can only be labeled as INTENSELY ENTERTAINING and totally DIFFERENT than anything else out there today!

With ovation-filled acts on NBC's hit TV Show "America’s Got Talent" ... sold-out shows at The Tropicana, Caesars, and The Resorts Hotel in Atlantic City ... headline performances both nationally and internationally in Times Square, Las Vegas, Canada, Europe, and the Caribbean ... Eric and his lovely assistant Eliana bring a youthful modern vitality and passion to make magic cool again! It’s a high-energy show for the entire family that you just have to see to believe!

Eric has been the recipient of a variety of awards, most notably the prestigious "Tannen’s Stage Magic Champion.” His inimitable style, personality and humor resonate with young and old alike, and has "Extreme Fans" of all ages all over the world! Don’t miss The Extreme Magic of Eric — get ready to be uniquely entertained as never before!