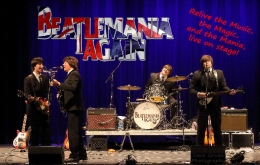 The Beatles left London's Heathrow Airport on February 7th 1964, with an estimated Four Thousand fans screaming and waving. They arrived at  New York's JFK Airport, greeted by a similar crowd. Two days later, they appeared for the first time on the Ed Sullivan Show to a record 73 Million viewers in the USA.

Experience the excitement as "Beatlemania Again" begins the recreation of The Beatles phenomenon.

The production captures the energy and excitement of The Beatles live performances with the original sounds of the albums. Act Ones authenticity is showcased by actual instruments and amplifiers used by The Beatles. The look is astonishing with the fine tailored black velvet suits.

The Beatlemania Again Stage Show chronologically traces the Beatles career from their debut on the Ed Sullivan Show in 1964, to the psychedelic Sgt. Pepper era, to the final years of Abbey Road and Let It Be.

It’s a performance that any fan of music must see. If you were there, this is the way to catch up fast through the talents of the national touring production of BEATLEMANIA AGAIN.

Relive the music, the magic and the Mania Live on Stage!