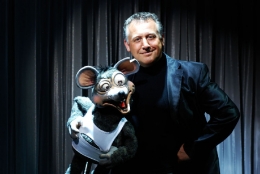 Willer Nicolodi is one of the world's best and most popular ventriloquists! In his unique stage shows he speak English, German, French, Italian and Spanish. The humorous shows are a great fit for an international audience!

Born into a family of Italian artists, Willer Nicolodi’s career began when he was ten years old. In the 70’s and 80’s he toured together with his two brothers as an acrobatic trio in Europe and the United States of America. During this time Nicolodi discovered and perfected his talent for ventriloquism. In 1995, when his brothers decided to put an end to their acrobatics careers, Willer began his career as a ventriloquist in Australia. This was followed by successful appearances in Singapore, Moscow, Spain and Monaco, where in 2004 Princess Stephanie awarded Willer with the "Bronze Clown" for his achievements in the ring.

In March 2015, after forty years, he is returning as an internationally acclaimed show star for the largest Swiss Circus Knie. On the tour in 2015 with the Swiss National Circus, the charming Italian won the hearts of audiences across Switzerland.

Audiences all around the world will enjoy the splendid performance. Willer Nicolodi brings his humor to every show, and audience participation in his shows guarantees all generations a hearty laugh. Meanwhile the multilingual world-class ventriloquist performs not only in the ring, at VIP galas and at corporate events in cities around the world, but also participates in fantastic shows with standing ovations on cruise ships run by Costa Cruises, MSC Cruises and Royal Caribbean.