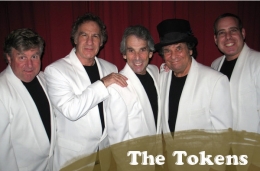 In 1961 THE TOKENS, four boys from Brooklyn, recorded, "The Lion Sleeps Tonight" on the RCA label. The song (originally a Zulu folk song called "M'bube" and Anglicized to "Wimoweh") soared up the charts to become the number one hit in the nation. To date it has sold over 15 million copies and is known throughout the world. In a survey conducted by the National Endowment for the Arts and the Record Industry Association of America The Tokens' classic recording of "The Lion Sleeps Tonight" placed 159th in the top 365 records of ALL TIME.

THE TOKENS' other hits include "Tonight I Fell In Love," "I Hear Trumpets Blow," and "Portrait of My Love." They have also produced many number one recordings for groups such as THE CHIFFONS ("He's So Fine" & "One Fine Day"), THE HAPPENINGS ("See You In September & I Got Rhythm") and TONY ORLANDO & DAWN ("Candida," "Knock Three Times," & " Tie A Yellow Ribbon.") True rock pioneers, they were among the first to successfully use the falsetto lead voice, a sound that later influence groups from the Four Seasons and the Beach Boys to Led Zeppelin and Rush. They were also the first group to play their own instrument tracks for recording sessions.

In 1998 THE TOKENS became the first and only group to sing the National Anthem in all major league ballparks in one season. This accomplishment landed them into the Guinness Book of World Records. On July 6th of 2005, The Tokens were inducted into the Vocal Group Hall of Fame. Their blend of showmanship humor and excellent musicianship has made them a favorite headliner throughout the world.