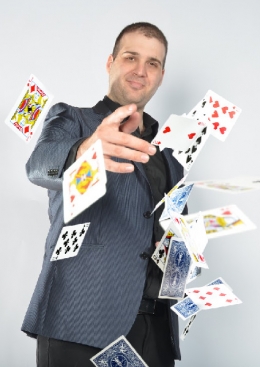 If you don’t believe in magic, spend an evening with Michael Bourada and he might change your mind.

Michael is an award winning entertainer and one of the most sought after magicians in Canada today. Forget the traditional magic show, Michael amazes the audience with an exciting assortment of illusion, upbeat magic, laugh-out-loud moments and charming style. With over 18 years of experience Michael is no stranger to the stage; he has been featured at performance theatres, corporate galas and festivals all over Canada. Bourada’s Magic and Comedy Show is an amazing blend of original, stunning magic and laugh-out-loud moments sure to capture the imagination.

His interest in magic started while he was young and truly blossomed while he was a teenager. He performed anywhere he could, being featured at fairs, parties – even the streets. Michael’s passion developed into a full time profession and his show grew to become bigger, more impressive and play for larger sized audiences. When he was 19 Michael was offered a unique chance to travel nationwide with his show and he became one of the youngestillusionists in Canada to have their own touring production. Flash-forward to today, Michael presents exclusive routines and thrilling magic that capture the imagination and dazzle the mind. Offering unparalleled professionalism, Michael has entertained for name corporations such as, Coca-Cola, TD Bank, NAV Canada, Shell, Costco and many more…

For all his hard work he was nominated for a prestigious award, 2012'Canadian Entertainer of the Year' by CSE (Canadian Special Events Assoc.),this is directly due the quality and quantity of shows he presented for corporate events and upscale venues in Canada. Additionally he was recentlynamed Faces Magazine ‘Entertainer of the Year’ for 2014-15

He has performed over 4000 shows and been featured on television over 25 times.

Michael is based out of Ottawa, Canada and travels nationally and internationally.