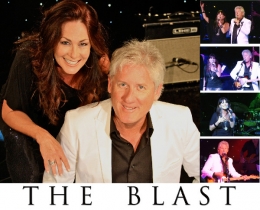 The Blast Duo exudes amazing chemistry that comes from years of experience, talent, energy, good looks and professionalism. It was magic from the start when husband and wife team, Steve & Terri Williams met and began performing together. Their vocals are seamless, as if to become one, and are described as that perfect blend you usually only get when siblings harmonize. The Blast Duo engages their audiences so much so, that the audience feels as if they’re extended family. Steve and Terri’s musical careers have covered a wide range of genres and that’s obvious when you see the diversity of their shows and they have been featured guest entertainers on Norwegian Cruise Line’s Pride of America since 2010. Individually they are:

Steve Williams’ song, “Where Have I Been All My Life” is featured on George Strait’s latest album, “TWANG” (2009 release) and has been heralded as one of the most poignant songs of Strait’s career. His summer fun song, “Redneck Yacht Club” went to #1 in 2005, crossing over into the pop charts, becoming one of the most downloaded songs of the summer and spawning the popular website www.redneckyachtclub.com. Bucky Covington’s 2010 release, “A Fathers Love (The Only Way He Knew How)” another Williams’ write, received rave reviews with country radio quoted as saying, “It’s Bucky’s best yet!” Other successes include; “I Get To”, which flew to #1 on the Christian Music Charts and has been recorded by several artists, and “I Didn’t”, recorded by Trick Pony. As a performer, Steve captivates audiences with his talent and powerful songs that make you feel the full extent of emotions. Williams has performed worldwide with artists, Kenny Chesney, Tanya Tucker, Doug Stone & many others.

Terri Williams has performed since the age of 18 entertaining throughout the U.S., Europe and Japan. Her career spans many genres from pop, soul, country and jazz standards and her personality and stage presence keep her in the spotlight. Currently, she lends her talents on guitar and vocals as a member of retro group, The Willies, a group reminiscent of harmony groups of the ‘40’s and ‘50’s. Their CD “Vinyl Frontier” features both covers and their original music. She also performs with her husband as The Blast Duo on Norwegian’s Pride of America cruise ship.