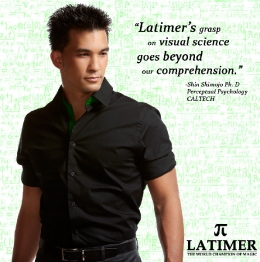 "The Greatest Magician working today." - Parade Magazine
"One of magic's most gifted creators." - Genii Magazine
"With Latimer, the future of magic is in good hands." - Siegfried & Roy
"One of the superstars of tomorrow." - The Daily News

Latimer has a resume that staggers most academic professionals and illusionists around the world. With an adept gift for grasping sciences across multiple fields and more awards for performance than many accumulate in a lifetime, Jason Latimer has defined himself as truly one of a kind.

At an early age Jason knew he wanted to be a magician but he also knew he never wanted to saw a woman in half. As a fan of magic himself, Latimer felt audiences around the world wanted see the art of magic evolve. It was time for something new and knowing he had the capacity to offer something more than classic tricks, Latimer went to work. It was obvious to him; truly new effects would never be in a magic book. More importantly, he felt they would to be somewhere in a better understanding of his environment and the mechanics that govern the world. Unlike any illusionist before him, he put down the magic books and picked up all of the science books. With an ingenious step forward, he combined all the known sciences (i.e. mathematics, physics, chemistry, psychology and other fields of study) to create a new form of magic. Latimer then began designing and building modern effects for what he felt Twenty-first Century magic should look like ...and the public has responded resoundingly.

Today Latimer is highly recognized for his numerous advancements in the art of magic. This young man has stolen the spotlight on multiple occasions as “one of magic’s most gifted creators” (Genii Magazine). Combining technology with performance, humor, psychology, choreography, and pure sleight of hand skill with scientific advantages Latimer’s high-energy show is a visual blowout. His style of modern mysteries is literally ushering in a new era of magic on an unprecedented level. At twenty-two, Latimer became only the third American in history to be the official “Grand Prix ‘Best Overall’ World Champion of Magic.” That prestigious title became the catalyst to his unveilings of countless creations for Twenty-first Century effects. He pioneered live stage illusions of bending lasers with his bare hands, shaping water into objects and popping them, drawings that morph before your eyes, 360 degree “bullet time” levitations of people on stage, levitating liquids and many more jaw dropping visual effects which he actually builds himself. With his own two hands, he has changed the entire look magic on and off stage. And to Latimer this is only the beginning…

At age nine Latimer caught the attention of local magic shops and magicians for his aptitude for learning and his technical ability in sleight of hand. Jason was quickly taken under the wing of the magic community, by age fourteen he had his own weekly show and four years later he was one of the youngest individuals to headline at the world famous Magic Castle in Hollywood, California. At nineteen, he was the opening act for Amazing Johnathan at the Golden Nugget Hotel and
Casino in Las Vegas, Nevada. And when Latimer turned twenty-one he was singled out by the "Magicians of the Century," Siegfried & Roy, when they awarded him the S.A.R.M.O.T.I Award (Siegfried And Roy Masters Of The Impossible Award). Siegfried & Roy describe his work as “revolutionary” while explaining, “With Latimer, the future of magic is in good hands.” Soon after, Latimer is awarded the title of "Newcomer of the Year" from the Society of American Magicians. He then decided to put his designs to the test in the magic contest scene. Armed with his entirely uncategorized form of magic, today he holds an unparalleled eighteen consecutive international awards and wins. This remarkable streak includes his triple win of the titles "World Champion of Close up Magic" and "World Champion of Inventive Design for Illusion," and the highest honor the world of magic can offer any individual, the coveted title "Grand Prix 'Best Overall' World Champion of Magic."

Latimer has been acknowledged as the "Greatest working magician today" (Parade Magazine). His talent for blending different disciplines have made him the leader in live visual effects, “Jason’s grasp on visual science is beyond our comprehension” (Shin Shimojo Ph. D, Perceptual Psychology, CALTECH). So when this creative force is not performing, he continues to build upon his ideas at the most advanced research and creative development studios for magic in the world, Latimer FX (LFX). By continuing his pursuit of education amongst his colleagues at universities in fields of technology, psychology, physics, and engineering, Latimer has maintained a direct pipeline from the latest technological advancements in the world to his personal magic studio in Los Angeles, California. Here Latimer designs and fabricates the illusions of tomorrow and maintains his reputation for possessing the most innovative illusions in the industry. He continues to work hard pushing magic into uncharted territory with more performances and mind-blowing effects never considered to be remotely possible. Latimer is redesigning magic.

This is magic redesigned for the Twenty first century. Unlike any magician or illusionist before him, Latimer set out to create his own entirely new genre. With an exceptional talent to think across multiple fields of study, he combined all of the known sciences (i.e. physics, chemistry, psychology, mathematics, etc.) into one high impact live magic show. His ability to consistently create new jaw-dropping illusions has defined him as “One of magic’s most gifted creators” (Genii Magazine). With eighteen consecutive international awards and wins for his work and performances, including his three World Championship titles, Latimer’s illusions are simply on an unprecedented level. From his highly visual and entertaining stage illusions to the psychological blowouts, he has created a magic show unlike any other in the world. In his live performances you witness him shape water into objects and pop them, bend a beam of light with his bare hands, bring a drawing on his skin to life as it morphs before your eyes, and that’s just to name a few of his incredible effects. Whether its his breathtaking effect of “bullet time” with a person levitating in the air while the entire scene is rotating 360 degrees or your puzzling moment as a cloud of smoke forms itself into a shape on stage, Latimer’s magic “…goes beyond the boundaries of what magicians have ever explored before” (Siegfried & Roy). Combining technology with performance, humor, psychology, choreography, and pure sleight of hand skill with scientific advantages has captivated the imagination of the world with what is truly impossible. With performances in over forty countries, Latimer is changing the way the world experiences magic.