Home/ Talent Roster/ Switch, Back to the 80's 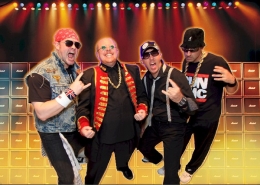 "Thanks a million for a great night. The comments last night & this morning are awesome! People absolutely loved the music and the chance to participate. HOMERUN!" - Mike W. - Gaylord Palms Resort & Convention Center
"We have never seen a crowd react as they did that night to a band. It was a ROCKING SUCCESS! These top-rate musicians/performers are sure to please, entertain, and bring down the roof on your next event." - Brenda D. - Sr. Meeting & Event Planner
"Booked numerous times for events and they have never disappointed. Songs everyone loves plus a stage show loaded with energy and excitement. The dance floor is always packed to the very end - their energy is infectious!" - Aaron S. - CMP

SWITCH Back to the EIGHTIES

This band is like riding in a DeLorean, about to hit 88 MPH!

They are right out of the 1980’s. A high energy party band from Orlando, Florida

They have shared the stage with Rick Springfield, Tears for Fears, STYX, Berlin, Loverboy, plus others.

SWITCH has entertained audiences throughout the country with their unique style and high-energy party live shows for over a decade.  Made up of talented and highly creative entertainers, they have stunned audiences with their brand of interactive music and visual performances. The set list delivers hit after hit from the last five decades, a little something for everyone. You will know the words to every song!

People don’t just watch the band during the event - they become connected to the music and involved in the show. “It’s not about us, it’s about the people in the audience and we make sure everyone has a great time!” From a large themed corporate event to a small party, SWITCH Entertainment delivers.