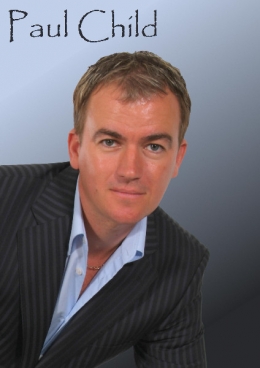 Paul Child hails from Wales, UK – The Land Of Song, where he is described by the media as 'The New Tom Jones'. Paul is the official singer for the National Rugby Team and performs regularly in front of 75,000 people at The Millennium Stadium.

Paul's musical career started in his teens, when he sang in rock bands while simultaneously taking opera lessons and developing his natural tenor voice. In his twenties, Paul lived on the holiday island of Tenerife in the Canaries where, over a period of four years, he developed his style as a cabaret performer, working the islands most prestigious venues while also hosting his own programme on the Canary Islands Radio Station.

Paul returned to his native Wales in 1996 and hit the country's cabaret scene with a bang, starting as an unknown but winning the Agent's Association award for best male vocalist in his first year on the circuit. Paul quickly progressed from the working mens' clubs to the theatre circuit and released his first album in 2000 which sold over 100,000 copies.

In 2005 Paul became the official singer for his country's national team and since then has performed regularly at the Millennium Stadium before various sporting events.

Although primarily a singer, Paul Child has developed into an all round performer, with a great repertoire of music – all with his own unique and unforgettable arrangements. With a mix of standards, up-tempo classics and contemporary ballads, Paul has songs to make the audience cry and combines them with one-liners to have them doubled up with laughter. His live show has taken him all around the world, performing for Royalty in Bahrain and Dubai, touring concert halls in Australia and of course, regularly touring in his native Wales where Paul continues to sell out theatres all over the country.

Paul Child is an act that your audience will want to see again and again.