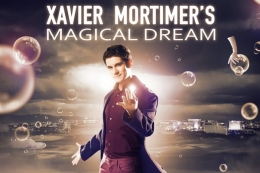 "Phenomenal!" - Howie Mandel - "America's Got Talent"
"Brilliant. Original illusions. Bravo!" - Penn & Teller
"A literally enchanting show." - Le Nouvel Observateur
"Xavier Mortimer takes us on an emotional roller coaster through a dazzling spectacle!" - Le Pariscope
"We (the public) are taken back to our childhoods, in wonder and delight." - Le Figaroscope

As seen on "AMERICA'S GOT TALENT," "THE NEXT GREAT MAGICIAN,"MASTERS OF ILLUSIONS."

At the age of 15, he creates his first show, a combination of magic, mime and comedy. Thereafter, he wins several prizes for Magic (1st place at the Albano International Congress in Italy, Gold Star at the L’Eau d’Olle magic festival in France).

A truly complete performer, he is the recipient of several more international prizes for Magic rewarding his shows.

He achieves public recognition with his show » L’Ombre Orchestre » (The Shadow Orchestra) created in Avignon in 2006 and subsequently performed in Paris and worldwide more than 800 times.  Xavier Mortimer is both the creator of and performer in visual shows that he presents internationally.  What’s more, he not only composes the music for his own shows, but for other shows as well.  In 2012, he creates the character Sneaky for the newest Cirque du Soleil’s show: ONE, which is currently performing in Las Vegas.  Between 2013 and 2015, while performing in Vegas, Xavier has been a guest on mainstream TV shows all around the world and he is about to release his new magic show in 2016.

He currently headlines his own show on the Las Vegas strip while touring internationally and appearing on TV shows all around the world.