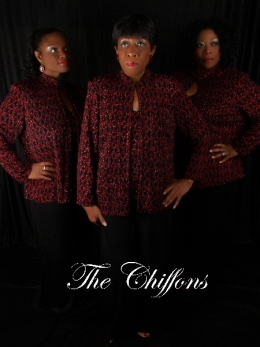 The Chiffons are an all girl group originating from the Bronx area of New York in 1960, best known for hit pop singles such as “One Fine Day” and “Sweet Talkin’ Guy” that are staples of oldies radio.

The Chiffons’ sassy flair made them one of the top Girl Groups of the early ’60s. With their trademark tight harmonies, high-stepping confidence and the hit machine of Goffin and King writing songs such as “One Fine Day,” the Chiffons made music that helped define the Girl Group sound of the era.

The group comprised Judy Craig (lead singer), Patricia Bennett, and Barbara Lee. Sylvia Peterson was added to the group in 1963.

The group had already recorded a handful of singles when they hit the number one spot in the United States with the song “He’s So Fine.”

George Harrison’s 1971 “My Sweet Lord” was musically almost identical, prompting a copyright infringement claim. The Chiffons went on to record “My Sweet Lord” in 1975. A judge later found that Harrison had unintentionally plagiarized the earlier song.

Their first hit was followed by other notable tunes such as Gerry Goffin and Carole King’s “One Fine Day”, “Sweet Talkin’ Guy” and “I Have a Boyfriend”, although many of their recordings were derivative of the period. Their Top 40 single “I Have A Boyfriend” was playing on Dallas station KLIF on November 22, 1963 and was interrupted by the first radio bulletins of the JFK assassination. The group also released material under the title The Four Pennies. They released two singles on the Rust Label.

Craig left the Chiffons in 1968 and they continued as a trio. In 1992, Lee died from a heart attack the day before her 45th birthday, and Craig returned to the group. Peterson retired shortly thereafter and was replaced by Connie Harvey. Harvey has since left to pursue a solo career and Bennett has retired from the group. Craig continues with replacement backup singers.

Currently as of 2009, Judy Craig performs as The Chiffons with her daughter and her niece, performing at select shows throughout the U.S. and Internationally.