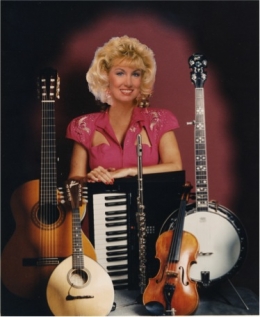 Kelley Kennedy is a multi-instrumentalist and vocalist who has performed all over the world as a solo entertainer as well as a member of several bands.  Kelley sings in several foreign languages and plays violin, guitar, flute, mandolin, piano, piccolo, accordion, banjo, and multiple international ethnic instruments to create unique, amazing shows.  She performs several different styles of music including Pop, Musicals, Country/Bluegrass, Celtic, Classical, Latin, Ragtime, European and World Music which she combines into two distinct “International Shows,” a “Fiesta Latina” (Latin American show), and a US patriotic “Americana Show” and can tailor her shows to please any age group, nationality or musical preference--something for everyone.

Kelley sings songs in English, Spanish, Portuguese, French, German, Italian, Hebrew, Greek, Japanese, and Korean and can introduce her shows in English, Portuguese, Spanish, French or German and is particularly geared toward international audiences having traveled the world both as a musician and as an US military officer.  She is self-contained with backing tracks and band charts.