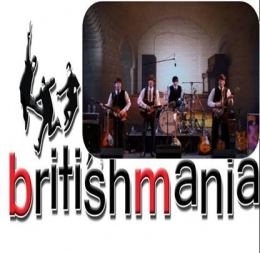 "BritishMania, you rocked the home of The Beatles. You're a pleasure to work with & the fans loved you. Thanks for keeping the spirit of The Beatles alive through the music!" - Liverpool Tours

Cruise Buyer - Britishmania offers flexible casting in all parts of the country for convenient flyouts!

UP TO 5 COSTUME ERAS!

The legend lives on with Britishmania the World’s Best Beatles Tribute Band. With mind blowing performances, and true to era attire, Britishmania recreates the Beatles revolution that changed the world. This legendary foursome delivers note for note theatrical performances that will take you back in time. Experience the worlds’ most iconic band today.

The Beatles Tribute Band That takes You Back

It all started in 1960 with John Lennon, Paul McCartney, George Harrison, and Ringo Starr— a new music legend loved by millions was born, The Beatles! The Beatles revolutionized the world of rock music, making them one of the most iconic music groups of all time, changing the world of rock music forever. The Beatles were a well-loved and well-known band throughout the world, and their music lives on today through Britishmania Beatles Tribute Band! Britishmania is so much more than a Beatles Cover Band, they pay tribute to the most influential band of all time! Keeping the spirit of the Beatles alive through their perfected theatrics and expert performances! The Beatles were loved by millions, and thanks to Britishamania, a whole new generation will have the opportunity to fall in love as well! Book Britishmania today for your next event, and enjoy the music and the spirit of The Beatles in person!