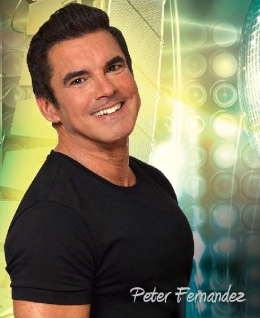 "Peter has a beautiful voice and genuine charisma plus a well paced and very professional show." - Phillip Osterman, Broadway Producer
"Peter is a showstopper! The highlight of our cruise." - Dan Palmer, Miami Community Newspapers
"My money is on Peter Fernandez, he is a polished performer." - Dramalogue, Los Angeles

Peter Fernandez started his artistic career in Miami as the lead singer of several Rock n’ Roll bands. At the age of 17, he recorded his first album with record breaking sales in the Latin music market. With the band "Coke", he recorded "Sabor a Mi", introducing this classic to a whole new generation. Later, with another Miami band, "The Antiques", he recorded 2 albums and the hit disco single "Cuando Vuelva a Tu Lado" (What a Difference a Day Makes). Later, he was also the lead singer for the Ft. Lauderdale based band, "Ecstasy".

Peter made the move to Puerto Rico to join Anexo 3, a well-known group from the island. He recorded 2 more albums with Anexo 3 and wrote the Spanish version of Gloria Gaynor’s "I Will Survive".

Upon winning the Best Male Vocalist category at the International Song Festival of Puerto Rico, Peter decided to embark on a solo career making his first appearance on Don Francisco’s "Sabado Gigante" in 1984 when the show was still produced in Santiago, Chile. Soon after, he was asked by Delia Fiallo, the queen of the Spanish Soap Opera world, to record the theme song to her telenovela, "Tu Mundo y el Mio". This project gave him international exposure and landed him a recording contract with CBS International (Sony Records).

With numerous appearances on Telemundo and Univision (Spanish Network Television) and several recordings under his belt, Peter continues to enjoy performing his night club act in show rooms from Las Vegas to Atlantic City and on Cruise Ships all over the world.

With a show that is exciting and full of variety, dynamic singer Peter Fernandez delivers Pop, Rock, R&B, Big Band and Broadway tunes with the same passion and intensity that he brings to the Latin music of his heritage.

Singing and dancing to the Rumbas, the Mambos and the Cha Chas, as well as the Classic Standards of the 40’s to the Contemporary Music of today, Peter Fernandez is a consummate performer and a powerhouse of entertainment. With the advantage of being perfectly bilingual, this artist can also perform his show in English or Spanish.

Continuously tailoring his show to accommodate the needs of each particular group or demographic, Peter strives to find the proper balance, carefully choosing the kind of material that brings the most enjoyment to the most people. Part of his extensive repertoire includes songs in German, French, Italian and Portuguese as well as a tribute to Mr. Babalu, Desi Arnaz, that recreates an unforgettable and heartwarming piece of American nostalgia.

This talented entertainer’s performance encompasses from the gyrating hip action of a Ricky Martin to the intoxicating romance of a Spanish love song. It is clear to see how a showman of this caliber has earned the title of "Singer Extraordinaire, with a Latin Flair!"