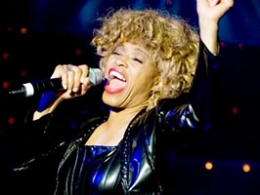 Cookie Watkins brings more than a celebrity impersonation to her performance the award-winning live tribute show Legends in Concert. Music has been Cookie’s mainstay since Duke Ellington brought her onstage to warble out a few tunes at the ripe age of fourteen. The Duke gave Cookie a coming-out party at the Rainbow Room when she turned eighteen. She even warranted a special mention in his book “Music Is My Mistress.”

Always thought of as the little girl with the big woman’s voice, Cookie studied opera and classical music before her out-of-the-box smash hit “Can’t Judge a Book by Its Cover” brought her to the forefront of the dance movement. Soon she was lending her vocal expertise to such smash hits as Shades of Love’s “Keep in Touch” (Body to Body).

Known to Underground music fans as “Iron Throat”, Cookie admits to being highly influenced by R&B legends like Aretha Franklin, Patti Labelle, Bobby Womack and the legend she so enthusiastically tributes, Tina Turner.

No stranger to Broadway, Cookie also performed in hit stage musicals like “Guys & Dolls,’ “Sweet Charity,” and “Hair” before touring with the original cast of “Beehive” and Marie Wilson.

Cookie allows the audience to savor the saucy effects of Tina’s “Higher” before a seamless transition to the throaty “Better Be Good to Me” followed by “What’s Love Got To Do With It?”. But Cookie and her audience know nothing tops the high-energy stand-up hit and closer “Proud Mary,” and that is exactly what Cookie does Tina---“Proud!”