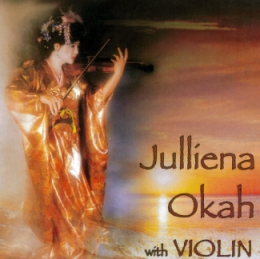 At the age of 5, she started to play violin.

She was educated in Tokyo, Japan and went to further study to Vienna in Conservatrium. She received a scholarship from city of Vienna and became the first person in Japan. She had an opportunity to work in Vienna Church Orchestra and Vienna Radio Orchestra. She performed with them in "Shone Brune Palace" where Mozart often performed and also the place Marie Antoinette lived. After she finished academy. she had an honorable chance to become one of the biggest orchestra member in Vienna.

However, during her sojourn, she discovered Gypsy Music and fell in love in it. She was instructed by one of the most famous Gypsy Violinist "Lakotos Sandor." That was a very special event. Because Gypsies do not teach to strangers, only from father to son. That's their tradition.

After she left Vienna, she performed as Gypsy Violinist in Palace Hotel, Intercontinental Hotel in Tokyo. hotels and Hungarian restaurant in Sydney, Australia. Then she was offered to appear on T. V. show in Europe by Hungarian Embassy. However, she came to Hawaii, USA, and Canada to perform as Gypsy Violinist.

She also had an opportunity to perform in MGM Grand Hotel, Las Vegas with world famous stars such as Dean Martin, Mc Davis, Julio Gracious, Bob Hope, Liberace for one year.

After she left Las Vegas, she started to work with her own show as a headliner on top class luxurious cruise ships. She performed 60 ships over 500 Cruises traveling all over the world until this day such as Silverseas, Royal Caribbean, Norwegian, Celebrity, Cunald, Costa, Royal Viking, Princes, etc.