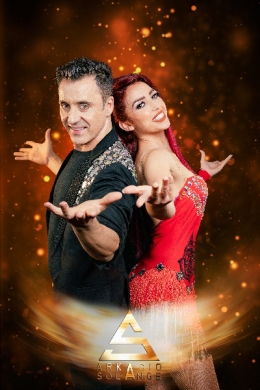 Arkadio was born in Barakaldo (Bilbao, Spain)  His interest by magic started at the age of 10 when he saw for the first time a magician working in a Theatre. What at the beginning it started as a hobby, it finishes as a profession. His professional career began when he was called to work as a magician for “Universal Studios Port Aventura” in Salou (Tarragona, Spain). He was working there during two years performing the magic show called “Xing Txo´s Mystery”. The third year he was performing and was the artistic director of the magic show called “The Magic Legend”. When his contract with “Universal Studios” finished, he started to prepare a competition to go to Portugal and participate in the “Magic Valongo” in 2004 where he got the maximum distinction. The next competition was the “Magic Spanish Championship” in 2005 where he got the first prize in the Manipulation category. He went to the “Magic French Championship” in 2006 where he won the first prize in the Manipulation category too and the “Audience” prize. After this, in 2007, he was given the “Mandrakes D´Or” in Paris. Then, he was asked to work with his Show in different countries all over the world (Spain, Switzerland, Germany, Italy…). In 2008, he was called to work in the famous TV French program: “Le Plus Du Gran Cabaret Du Monde” and after this, he was invited to participate to the prestigious competition “Magic Star”, which is organized by the Monegasque family, and won the first prize, the “Baguette D´Or”, which was given to him by the Prince Alberto from Monaco. Since then, he has been working in loads of Festivals, Events and TVs all over the world.

Solange was born in Leiria ( Portugal ).

Belongs to the 3rd generation of illusionists. Since very young her life has been around the wonderful world of magic. One of the things that stands out, is that she mix in her shows the illusion with her strong voice, leaving audience with desire to return and repeat the magnificent experience.

A act of quick change costume that makes the difference for its speed and variety, its elegant movements delights the public. With this act she was in several festivals of magic, televisions, circus, of all world and in one of the emissions of the most popular program of varieties of Europe edited in France "Le Plus grand Cabaret du Monde" (2014).

With only 10 years old, he won a revelation prize at the Magic Valongo international competition (Portugal 2001).

With only 15 years old, Solange was a magician teacher in a famous reality show on Portuguese television (TVI - Circo das celebridades 2006).

In 2018 she was the first woman in 26 years to win the 1st magic prize at the international Almussafes Magic festival in Spain.

In the same year was awarded as magician of the year in Portugal, being also the first woman to receive this award.

What sets her apart from all of the quick change routines, apart from her speed, is the ability to do everything on her own.