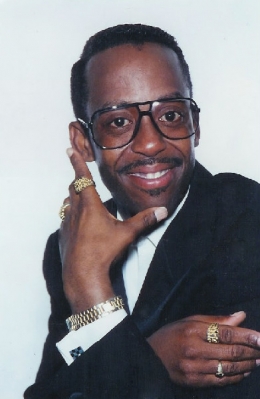 If you combine the comedic styling of Robin Williams and Eddie Murphy, throw in the smooth singing voice of Johnny Mathis, add the tap dancing skills of Gene Kelly and the musical talents of Wayne Newton, not to mention, dead on impersonations that make Rich Little take a second look, you've just seen a Doug Starks show.

From his shows at Radio City Music Hall in New York to the main stage at The MGM Grand in Las Vegas. Doug is one of the most requested acts in the country. Regularly working with such industry giants as Julio Iglesias on his world tour from 1995-98, Whitney Houston, Natalie Cole, Ray Charles, Smokey Robinson and many many more ...

Doug's many movie and televisions appearances include Hollywood Shuffle, Fear of the Black Hat, Comic View and Stand-up Spotlight but his remarkably haughting impression of the late great Sammy Davis Jr. has lead him to the very successful hit Las Vegas show The Rat Pack is Back at The Sahara Hotel "I get lost every time I see him perform" - Jackie Grace (manager) Sahara Hotel Las Vegas

Now if that's not enough, Doug has dominated the radio airways with his special comedic talents as his original characters Reverend Brother Pastor Deacon Doctor Doug and Uncle Buddy.

Doug was instrumental in creating the tremendously successful nationally syndicated Tom Joyner Morning Show. "On any given evening Doug Starks will pull from an arsenal of comedic characters, stories, songs and dance. A Must See! John Pecos - Las Vegan Magazine.