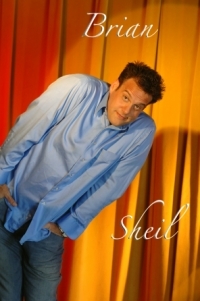 "I saw the most incredible show! Brian Sheil is not just a comic, he has so many people living inside of his head, he is practically a six piece Rock band" - Robin Marie, Columnist The Dessert Sun; Palm Springs

You will remember, tell your friends, and take them to see “The Brian Sheil Show”. A non-stop, laughter packed cavalcade of comedy; complete with impressions and musical parodies. He is the “One-man Entourage of Entertainment”.

The show must go on, and it does. Between his many TV appearances, or hosting star-studded red carpet events, performing comedy clubs, corporate shows, commercials, and voice-overs; Brian’s impressions are so accurate you most definitely have heard him looping many of Hollywood’s most famous voices. (Looping is when studios re-edit R-rated films to clean up the language for TV - This makes his Mother very proud.)

Brian is in great demand because his show appeals to such a diverse audience. They loved him when he opened for Rick Springfield. The same for Vic Damone and ‘wowed’ the crowds at the Ramones concert. He was equally successful at the LA County fair, Taste of the Big Apple, and the Daytona 500. There is something for everyone is this show.

Where old Hollywood meets the new Las Vegas; his stand-up will have your cheeks aching as you sing along to the hysterical song parodies of today’s most “vocally challenged” superstars. Hootie, Macy Gray, Bob Dylan, and Shaggy would all do well in speech therapy class, but with Sylvester Stallone as the teacher, no one will pass. Garth Brooks sings with his long lost cousin, Forest Gump. The boulevard of broken dreams becomes the Big K-mart of one hit wonders, where Rick Springfield “likes Pinacolates” through “Seasons in the Sun” and the Violent Femms get Ricky Martin a job “Working El Pollo Loco”. Robert Downey Jr. checks into rehab, only to find Elvis as his sponsor. Then Village Person try’s to circumcise Neil Diamond…you have to be there.