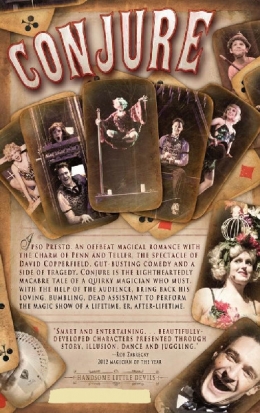 “As the devil is in the details, you somehow wonder if these two are employed by Mr. Beelzebub himself. Conjure is modern Vaudeville at its zenith.”

Ipso Presto. An offbeat magical romance with the charm of Penn and Teller, the spectacle of David Copperfield, gut-busting comedy and a side of tragedy. Conjure is the lightheartedly macabre tale of a quirky magician who must, with the help of the audience, bring back his loving, bumbling, dead assistant to perform the magic show of a lifetime, er, after-lifetime.

Conjure is an original comedy featuring Copperfield-style illusions, hilarious characters and a hint of tragedy. The Handsome Little Devils have collaborated with director Joseph Wartnerchaney and the Manhattan Creative group to create this magical, comedic and stunning show. In this light-hearted love story, Cornelius, the magician, conducts a seance to bring back his one true love (and lovely assistant), Abigail Nightly, who died tragically while onstage many years ago. If the audience truly believes, then Abigail will arrive–a buzzing bundle of energy who LOVES magic. Conjure brings classic magic illusions to the stage alongside new, signature routines that have never been done before. With skillful magic and dance routines, the Handsome Little Devils’ unique brand of comedy, and of course, beautiful costumes, music and set pieces, this is a high-energy piece of theatre that has audiences all over shouting Ipso Presto!