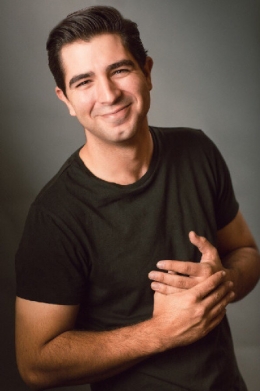 "I'm dumb founded. His voices are incredible!" - Dana Carvey
"His Vince Vaughn makes me feel money & I don't even know it!" - Freddie Prinze, Jr.
"I'm amazed at how he can rock a crowd from all walks of life!" - Gee Scott, KIRO/ESPN Radio Host
"Like watching a young Frank Gorshin." - Liam Neeson

Golden Globe and Oscar nominee and National Board of Review WINNER for Justin Rupple’s Co-Starring role in “How To Train Your Dragon: Hidden World.”

Over 13 years, Justin Rupple has made a name for himself in Hollywood.

Raised in a small town in Washington state, Justin worked as a host at one of the nation’s biggest comedy clubs in Seattle, day-in day-out for 2 years. Over 2 thousand shows.

He moved to Hollywood in 2010 and struggled like many to make ends meet. Multiple side jobs barely supported him as he made it into the 2014 CBS Comedy Diversity Showcase. He was then selected to the final round of SNL auditions only to go home empty handed.

In 2015 his break came when he was cast alongside Liam Neeson as Lt. Alexander Haig in the International film “Operation Chromite” in Seoul, South Korea.

From there the work continued to pay off as Justin WON his episode of Dana Carvey’s “First Impressions” TV show competition on the USA Network. Known in the comedy world for his nearly 100 spot on impressions, Rupple has become the go to actor in Hollywood for his unique ability to adapt his voice to the role.  He co-starred in 2019’s How To Train Your Dragon: Hidden World as Tuffnut. His voice work has also appeared in the films Spider-Man: Homecoming and Fast 8, and on TV shows like Doc McStuffins and Scorpion on CBS.

His first love though is stand up. He has performed at hundreds of colleges and clubs around 10 nations. No two shows are ever the same as he lets the audiences pick their own characters and topics making each show a choose-your-own-adventure comedy experience. Whether it’s stand up, acting or voice over, Justin Rupple is quickly becoming a staple in the entertainment industry.