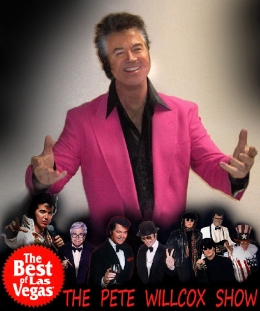 "Pete Willcox is a real in-person find. One of the rare breed of true rock entertainers." - Billboard
""Legends" is a rousing success. The showstopper is Pete Willcox." - New York Daily News
"Pete Willcox, "the best in the U.S."" - LA Weekly

For years I’ve been chasing the dream of being all that I can in our industry. It’s been great fun.  I’ve played at all the major gaming cities in America and got to do a few over seas as well.

I started out as a night club singer, traveled throughout the country, and wound up in Las Vegas.  The band broke up so I went to Hollywood and studied acting.  I chased that dream for a while.  I got to do a few voice overs, but my favorite was Elvis for Laverne and Shirley and Happy Days.  When Fonzie hit the jukebox and Elvis sang . . . it was me you heard.  It even fooled Elvis.

After we lost him I decided to put an act together.  I thought it would lead to acting roles.  I really wanted to play him in a movie, but Kurt Russell beat me to it.  However, I got some wonderful TV work ( Cheer’s, Designing Women, Murphy Brown, Alf, Full House, ER . . . you get the picture ).

On the live stage, Las Vegas has always been very kind to me.  I’ve done Elvis for many years, got to develop other characters ( I did Dean Martin for a Rat Pack show ) and had my own “parade of stars” more than once.  I was included in a record called “Jive Bunny”.   I was the voice of Elvis and it sold over 8 million copies worldwide.

Every once in a while I get an “Oh no . . . another Elvis impersonator”.  Well, if he’s not in the mix or one of your favorites, I understand.  I’m happy to tailor the show to fit your need and the situation . . . just as long as I’m in it.  By the way, should you be a big Elvis fan, we can do a show I call  ”Nuthin’ But The King”.  It’s all Elvis.  I get you comin’ and goin’ I’m in the process of recording an album with some of the greatest rock player of all time . . . people that played with the Beach Boys, Righteous Brothers, the rock bands of the 60s,  producer Phil Spector, and even Elvis.  My dear friend, legendary piano player Don Randi, will be guiding me through this project as we include classic rock, blues, and even try our hand at rockabilly. An album of original country rock will follow that.  I seem busy, don’t I…

I hope you find my work something you can use and we can do an event together. Remember, it’s your show and we can build it any way you like. I just want to be in it.