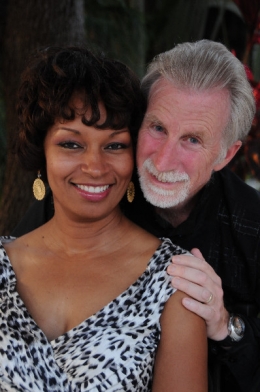 Don & Lesly Hale met in Ithaca, New York where they both attended the Ithaca College School of Music.  Starting in 1980, they performed together in a five piece band called "Dazz", playing club dates and fraternity parties as nearby Cornell University.

The band continued to work sporadically for several years while Lesly and Don pursued other projects.  Lesly was active in the Syracuse based Paul Robeson Theater Company, appeared as a soloist with the Syracuse Symphony Orchestra, and starred in a one woman show "Lesly" at Syracuse Stage.  Don taught school and toured for a couple of years as a trumpet player with Paul Anka, performing throughout the US - including Las Vegas, as well as in Mexico City and South Africa.

In 1985, Lesly and Don formed the duo, "Cahlua & Cream", and began working in the northeast.  They performed in hotels and nightclubs in New York, Pennsylvania, Vermont, New Hampshire, Delaware, and Virginia.  In 1993 they moved to Naples, Florida where they performed 5 nights each week at a popular nightclub.  When the club closed it's doors in 2002, southwest Florida country clubs and private organizations quickly solicited their musical services, which meant performing 6 and 7 nights each week for the duo.  When the season ended in Florida, Cahlua & Cream shifted their focus once again to the northern US.  Thanks to loyal Florida fans, Lesly and Don performed in such northern venues as The Medina Country Club in Chicago, in the Signature Room at the John Hancock building in downtown Chicago, and at Tibbits Opera House, in Coldwater, Michigan.

Don and Lesly continue to reside in Naples, Florida, where they were voted to be the best in entertainment in "Gulf Shore Life" magazine's poll two years consecutively.  Their shows feature such artists as Diana Ross, Petula Clark, Tina Turner and Whitney Houston, as well as hits from the Broadway stage.