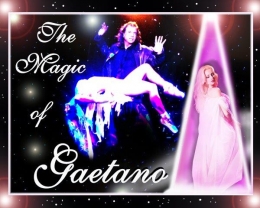 “The Magic of Gaetano” is the understated title of this world class, family friendly, illusion spectacular.

Trained in all aspects of Magic, Gaetano began his career as a professional drummer. His musical & Magical journey included and eight year Playboy circuit tour as well as a commissioned White House performance for the President and Mrs Reagan.

His comedic and Magical talents were finely honed as opening act for The Commodores, Phyllis Diller, Ray Charles, The Temptations and Joan Rivers.

Las Vegas beckoned and Gaetano was the featured Illusionist in the “Radio City Rockettes Spectacular” at the Las Vegas Flamingo Hilton which brought him the international acclaim he deserved.

Gaetano was now ready to bring his OWN world class elegantly staged show to the masses.

The combination of his musical talent, choreography skills, comedic timing and vast experience in Illusions are all integral to his show’s success.

BUT…what sets Gaetano apart from all of the others is his natural ability to connect with any audience…THEY LOVE HIM!

His fast paced, high energy show will “lift” and embrace you and take you on a journey of Pure Imagination.

THE MAGIC OF GAETANO

A true spectacular of Passion and Romance