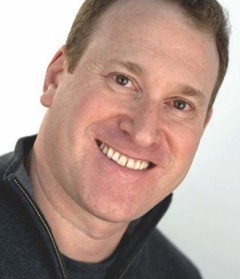 You may recognize comedian and actor Dave Goldstein from one of his many appearances on NBC’s Late Night with Conan O’Brien, including a particularly memorable role as a naked cop directing traffic in front of the Metropolitan Museum of Art on 5th Avenue in New York City.

His stage act, which has been praised by The New York Post (“…funny”) and The Asbury Park Press (“…his comic star is on the rise!”), is a blend of original writing and inspired live riffs. He has performed stand up comedy on The Comedy Network, Sirius/XM Satellite Radio, and The National Lampoon Radio Network.

Dave has been honored to perform for our troops numerous times and was the headlining comic on a tour of U.S. Army posts in Europe. He was also the comedy auctioneer for The Nelson Mandela Legacy Fund at the Embassy of the Republic of South Africa in Washington DC and The Carlos Beltran Foundation in New York ($50,000 for Derek Jeter’s cleats).  He is the official comedy auctioneer for Fort Ticonderoga, site of the first American victory of the Revolutionary War.

He’s opened theater performances for Dennis Miller, handled the audience warm up for Drew Carey’s CBS TV show The Power of Ten, been read on the Sports Illustrated website, and was an original member of the Improv group Far Beneath Gotham in New York City.  He is also in demand as a wedding officiant having married couples in nine states so far.

Dave Goldstein has also been seen in commercials for Sprint, New England Bank (also naked, why?), ABC Sports, and Pfizer Pharmaceuticals. He is a voiceover artist and has been heard in numerous instructional videos and was the voice of Madacy Home Video on the Howard Stern Radio Show. He has also had a number of essays on international affairs published.

Dave’s career has taken him across the United States, Canada, and Europe after first performing publicly at 13 as a guest of disc jockey New Orleans Slick on WFEC in his hometown of Harrisburg, PA.