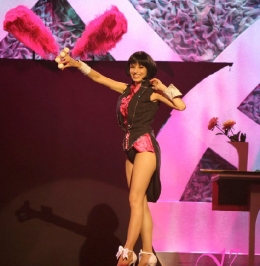 After only a few years in America, this "Budapest Bombshell" has taken the magic world by storm. With a fresh look at this ancient craft, Katalin has added a feminine twist to magic with her work being extremely tantalizing, stylish, yet skillful with a hint of comedy.

Developing an interest in magic when she was just five years old, Katalin took the traditional approach when she was chosen to apprentice with master magician, Janos Habok. After years of study and rehearsal with an added dose of creativity, her magic is anything but traditional. When she began performing, Katalin embarked on an unprecedented sweep of virtually every major magic competition by winning first place throughout her native Hungary, as well as, the surrounding countries, earning her the title, "Europe's Premiere Female Magician."

2004 brought even more opportunities when she was asked to work in the most famous, elegant night club in Budapest, Hungary, "The Moulin Rouge." This upscale club features some of the finest acts in Eastern Europe. Very soon it became clear that Katalin's talent was growing faster than her surroundings. She decided to follow a dream she had held since she was a small child and travel to the United States. More specifically, the Entertainment Capital of the World - Las Vegas!

Within months of arriving in Las Vegas, her striking beauty, engaging personality, and flawless sleight-of-hand skill drew the attention of many admirers. One of them, the producer of "The World's Greatest Magic Show." She was immediately added to the All-Star cast.

After only six months of working in the "World's Greatest Magic Show," Katalin was given a year contract as one of the featured acts in "Viva Las Vegas," the longest running afternoon production show in the history of Las Vegas.

The past few years has continued to heap accolades on this young entertainer. Katalin has been performing with Joseph Gabriel. Their combined talents co-starring in their full evening show "The Magic of Joseph Gabriel and Katalin" enabled them to break all box office records for their limited run engagement at the Shinagawa Prince Hotel in Tokyo, Japan.

On returning to the USA, "The Magic of Joseph Gabriel and Katalin" was voted "Show of The Year" after their 8 month run at the River Palms Hotel Casino in Laughlin, Nevada.

Shortly following, Katalin performed at the 53rd annual, "It's Magic" show in Hollywood, California in the legendary Kodak Theatre. This show, sponsored by the famous Magic Castle, hand selects top magicians from all over the world to perform for this spectacular "one-night-only" event. The line-up for the show is impressive - Rudy Coby, Joseph Gabriel, Kevin James, Mac King, Shimada, Lance Burton, and hosted by TV star Steve Valentine and Neil Patrick Harris. In magic's male-dominated fraternity, Katalin was the only female magician performing at this prestigious event!

Keep watching this fast-rising star and she continues living her dream and pushing the boundaries of Magical Entertainment.