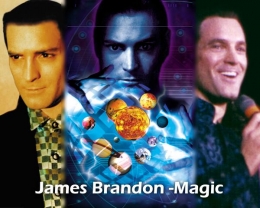 "James Brandon amazes the audience." - Las Vegas Style
"Very hard and imaginative illusions, no wonder he has received so many awards" - Show Time
"Sure to mystify and tickle your funny bone with his special brand of magic" - Entertainment Today

When James Brandon’s sister presented him with a starter magic set for his twelfth birthday she had no idea that it would inevitably lead to his professional career as a magician, comedian, illusionist, emcee and actor.

His high-tech magic show involving dance, pyrotechnics and live animals gained him immediate success on the European nightclub circuit and he immediately landed a staring role at the famed Alcazar de Paris. . The resulting 28 tours of Western and Eastern Europe included dozens of television appearances and the honor of presenting a Command Performance for the Royal Family of Monaco in Monte Carlo.

Among the most prestigious Medals and Grand Prizes bestowed upon James are the Seigfried and Roy “Golden Lion Award” he received in Las Vegas, the World Magic Olympics Medal he won in Japan and the “Golden Mandrake”, presented in Paris.

U.S. appearances at Lincoln Center’s Alice Tully Hall sparked interest from Twentieth Century Fox who then hired James to direct the magic scenes for Oscar winner Joe Pesci, for the hit film, “My Cousin Vinny”. As an actor and special effects consultant James has worked on commercials for MTV, Panasonic, IcyHot and on the Sting video “Desert Rose”.

Six South American tours supported by 23 television appearances resulted in his being featured on the Miami based TV show, “Best of Sabado Gigante” seen by 170 million people worldwide The success of that one appearance led to James filming the widely viewed American TV Specials, “The Great Magic of Las Vegas” for the Fox Family channel.

James then relocated to Las Vegas where he went on to star in 7 long running shows including “Splash” at the Riviera Hotel and Casino and “Imagine” at the Luxor Hotel and Casino.

Taking his comedy-magic show on tour, James starred in the “Basin Street Follies” at the Showboat in Atlantic City and in “Las Vegas Nights” at the Biloxi Grand Theater. Brandon then toured Asia 7 times finishing off in Malaysia at Genting, in a 2000 seat theater where he presented, “Odyssey, the Illusions of Space & Time”. Two shows a night were sold out for six straight months.

If James’ face seems familiar it might be due to the fact that he is currently the pitchman for “IcyHot” on their national TV commercial campaign.