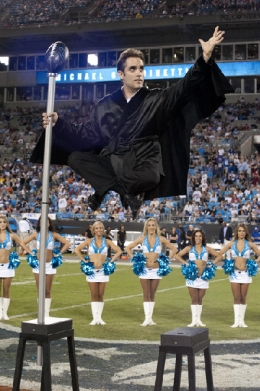 "Thanks for making our opening a huge â€˜WOWâ€™ for our attendees. It was truly a pleasure to work with you!" - Amanda Marijanovic, Producer, MYB Productions
"The show had a great energy and the audience was completely engaged. Your charm and witâ€¦perfect. You are a fantastic entertainer, a pleasure to work with, and at the top of my list!" - Paul Strabley, Event Producer, Iacono Productions
"I had SO MUCH FUN at your show last week. I have my 8 of clubs in my wallet. Makes me smile every time I look at it. Thanks for including me in your show!" - Renita, Film and Television Casting Director
"Michael, you truly are a gifted entertainer! On behalf of my group, I extend my deepest gratitude. We attended your show and it was the highlight of a truly spectacular and memorable evening!" - Dr. Joseph Michelli, Author of The Starbucks Experience, The New Gold Standard, and Prescription for Excellence
"I congratulate you on such an outstanding performance! The audience was wowed. It was a pleasure meeting you, working with you and experiencing your talent. You truly put on an amazing show!" - Leslie Finnin, Program Manager, Grainger National Event, Navy Pier, Chicago
"Michael was a great addition to our event! He worked with us leading up to the show in customizing the illusions down to the last detail to fit our needs. Our audience had a wonderful time being amazed." - Peter Donnelly, General Manager, Mazda North American Operations

Michael Grandinetti is not your ordinary magician.

With performances on national and international television, for NFL halftime shows, in stadiums, arenas, casinos, and theaters around the country, with symphony orchestras, for Fortune 500 companies, and even at The White House, audiences around the world have hailed Michael Grandinetti as an extremely talented and innovative illusionist.

Over the past 20 years, Michael has strived to make magic contemporary and to give it a wide, mainstream appeal, while taking his magic in new and daring directions. He has been featured on NBC’s “The World’s Most Dangerous Magic II”, “Entertainment Tonight”, ''New York Today", "FOX & Friends", “The Bold and the Beautiful”, "Crook & Chase", and "The Jerry Lewis MDA Telethon", two years in a row. Michael has also appeared on radio stations across the country, including several nationally syndicated broadcasts.

With a true passion for amazing audiences, Michael has performed at Heinz Hall with three time Oscar-winning composer Marvin Hamlisch and the Pittsburgh Symphony Orchestra, Grand Central Station and the Javits Center in New York City, John Paul Jones Arena in Virginia, the Cerritos Center for the Performing Arts in Los Angeles, the McCallum Theater in Palm Springs, Navy Pier in Chicago, the MGM Grand at Foxwoods Resort in Connecticut, the Fairmont Orchid Resort in Hawaii, and on the red carpet of ESPN's ESPY Awards at the Kodak Theater in Hollywood. Michael was also honored to be a featured performer at the White House Easter Celebration.

With his unique ability to design and incorporate magic to fit any theme, Michael’s work has been featured in sales programs, trade shows, and corporate galas around the country, showcasing his client’s products, messages, and team members in unique and memorable ways. A few of Michael’s custom branded effects have included pulling the American Marketing Association CEO out of a two dimensional video projection screen, sawing the Grainger CFO in half with a company provided power saw, and causing $100,000 to instantly appear inside a clear glass case for a Mazda “Top Sales” event. Michael was even called about the possibility of making the Dubai’s Burj Khalifa, the world’s tallest building, magically appear – before it was built! And this is just the beginning of what Michael can create.

Michael has also pioneered live magic in one of the most unique and challenging environments imaginable – major-league baseball and football stadiums. He recently performed an NFL halftime show at Bank of America Stadium when the Carolina Panthers played the defending Super Bowl champion New York Giants. During the event, a live audience of over 73,000 people watched with a 360 degree view as Michael caused people to appear, vanish, shrink in size, and levitate 10ft into the air, right on the 50 yard line.

During his previous stadium performances, at Citizens Bank Park, Michael made the 7ft, 300lb Philadelphia Phillies mascot, The Phanatic, instantly appear in the center of the outfield in broad daylight. At Kansas City’s Kauffman Stadium, creating a show to celebrate the 25th anniversary of the Royals World Series Championship, Michael presented a complete audio-visual performance blending pyrotechnics, grand illusion and high-definition video. The show featured one of the largest live interactive illusions in history as Michael read the minds of all 45,000 people in the stadium at the same time.

This is magic on a major scale.

Magic is Michael Grandinetti’s life. And, through his work, Michael is making the ancient art of magic engaging, charismatic and contemporary. By performing stunning visual illusions in spectacular locations and incorporating compelling music, romance, comedy, suspense, and audience participation, the result is an unforgettable entertainment experience.

Miracles Up-Close (Sleight of Hand Magic)
Witness amazing sleight of hand magic as Michael performs throughout your event. This personal, interactive style of entertainment creates magic just inches away from the audience and features borrowed dollar bills turning inside out, coins invisibly traveling through the air, and cards floating from the spectator's own hands.

Spend an unforgettable evening with master magician Michael Grandinetti as he combines never before seen platform magic with audience participation - pulling you right into the magic. Live stage effects include the visual, mid-air transformation of fire into a rose, borrowed personal items appearing inside a locked crystal box, a volunteer’s secret thoughts coming to life before their eyes, a piece of examined plate glass is bent and shaped, as if it were liquid, and much more.

Combining original magic and illusions with today’s hottest music, comedy, and audience participation, this high energy show is perfect for venues from ballrooms to theaters. You’ll be amazed as Michael levitates 10ft into the air, visibly shrinks a girl in size, takes a rosebush back through time, reveals the secret thoughts of three randomly selected audience members, and much more.

Motorcycles appear in mid-air, a man melts through a 7ft tall plate of steel, a painting of a beautiful woman is visibly brought to life, and a daring escape is attempted from between walls of flaming steel spikes - this is just the beginning of what you will see in Michael Grandinetti's full stage spectacular.

Are you looking for a magical way to unveil your new product, introduce a celebrity or featured executive, or to kick off your event in an unforgettable and stunning way? Michael Grandinetti Magic can create custom concepts and illusions that bring your brand to life. No idea is impossible.