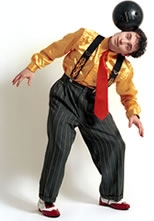 Michael Rosman's Amazing Feats of Comedy combines original tricks and stunts with a sense of humor and comedic action that gives audiences a wonderfully crafted program that they'll remember long after the show.

The jokes come non-stop as Michael balances on a board, on a bowling ball, on a table, and juggles torches. (Say that three times fast!) If that's not enough, watch as he catapults fruit into a blender strapped to his head. You read that right. A blender. On his head.

Alternating between the fine expertise of a polished performer with klutz and slapstick humor, Michael keeps audiences on the edge of their seats for a fantastic, fun-filled show.

Michael is unique among performers in his field and that can be traced to his training at the Ringling Brothers and Barnum & Bailey Circus Clown College. He's also a graduate of the University of Delaware with a degree in Finance. This dichotomy adds to Michael's unsurpassed talent, and gives his show a distinctive flair that's unmatched.

It's not just Michael on the stage, audience participation is key element to his show - don't be surprised if you find yourself helping Michael as he balances, juggles, and entertains.