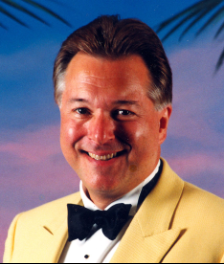 "Franco Spoto is a multi-talented artist who has a superb tenor quality. There is no getting away from it, he charmed the audience with his spectacular style and manner." - John Lanouette Brenner, "The Italian Post Gazette", Boston
""In the age of 'tenors,' Franco Spoto is considered by many to be one of the very finest."" - Anonymous

Franco Spoto has performed extensively throughout the United States, Canada and Europe in concert, musical theatre productions and opera. Among many highlights were concerts with the New York Philharmonic conducted by Leonard Bernstein. He was seen as Ciccio and Giuseppe in a highly acclaimed revival of The Most Happy Fella at the Majestic Theatre on Broadway, later presented nationally on the Great Performances series on PBS. There soon followed a stint with Sammy Cahn in his review "Sammy Cahn, Words and Music". Franco then created his own show which he has since given on more than 1000 stages across the US and Canada including sold-out headline engagements at the Circus Maximus, Caesars, Atlantic City.

Born and raised in the United States, he draws his repertoire from standard and contemporary hits, favorite Broadway shows, operas and familiar international tunes. He sings in many languages, including Italian, French, Spanish, Russian, German Yiddish, and Hebrew.

A unique talent, in demand on the finest concert and theatrical stages, Franco Spoto consistently demonstrates the high levels of artistry and versatility that mark a world-class singer.