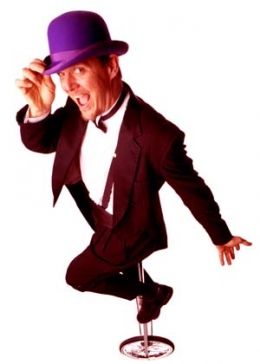 Frank Olivier developed his unique off-beat brand of humor in San Francisco starting off on the streets entertaining tourists, and quickly moving into the Bay Area's numerous comedy clubs. He was soon sharing the bill with Dana Carvey, Robin Williams, Whoopi Goldberg, and others.

While on his first trip to New York, planned as a vacation, theatre producers spotted his talents, and quickly signed him. He performed his act for the next three years in the Broadway touring hit show 'Sugar Babies' (a variety and burlesque musical, starring Mickey Rooney and Ann Miller).

Frank is also well known for his grace in handling volunteers onstage, and has brought up such luminaries as Henry Kissinger, Bill Murray, Sandra Day O'Connor, Kid Rock, Clarence Thomas, Jim Belushi, George Shultz, and hundreds of CEOs. He'll handle your people with the same ease and humor, and have everyone cheering. Cheering not only for Frank but your company's new "stars".