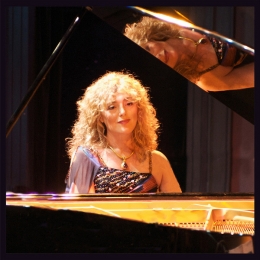 FROM MOSCOW TO MANHATTAN, FROM CLASSICAL AND POPULAR TO BROADWAY AND BOOGIE, Liana’s show is a dynamic musical celebration that merges her Russian Virtuoso background with her very own “Swinging Classics” style.

Liana Forest merges her Russian concert pianist background with her very own “Swinging Classics” style in a stunning production "From Moscow to Manhattan, from Bach to Broadway".  Accompanied by her Swinging Quintet, Liana takes us on an exciting journey - from the haunting melodies of Rachmaninoff and Chopin to modern renditions of Bach and Beethoven, from the brilliant exuberance of Rhapsody in Blue to the tuneful gusto of West Side Story.

Throughout the show, Liana entertains the audience with her humorous stories of coming to America in search of freedom and inadvertently ending the Cold War.

Russian-born Liana Forest has performed throughout the world receiving acclaim for her brilliant technique and warm stage presence. After immigrating to the United States, Liana appeared in concerts across the country, both as soloist and with symphony orchestras. She performed with the San Francisco Midsummer Mozart Festival orchestra, appeared in recitals in Germany and Austria, and performed for Princess Sofia of Romania. Her recent seasons have included appearances on National European Television in Holland, as well as orchestral and recital appearances in the US, Africa, Europe and Asia. Liana’s CD recordings of Romantic piano music sold more than 300,000 copies worldwide.

As Guest Entertainer Liana offers fresh and original interpretations by blending brilliant styles of jazz, popular music and humor with everybody's favorite classics. From the haunting melodies of Rachmaninoff and Chopin to modern renditions of Bach and Beethoven, from brilliant exuberance of Rhapsody in Blue to the tuneful gusto of West Side Story, Liana brings timeless musical gems closer to today’s listener as she dazzles and entertains.