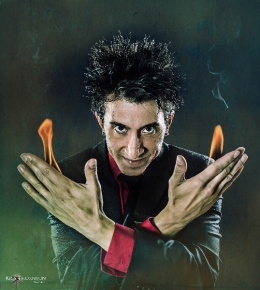 "Best opening act I have had in 15 years, If anyone needs the best in magic, they need Jay Mattioli!" - RG Smith, Executive Show Producer, Society of American Magicians International Gala.
"Thank you for your participation in this years shows. Your act played an important role in ensuring the success of our event" - Chris Pratt, Producer, THE MAGIC CIRCLE, London, UK

YOU HAVE NEVER SEEN A MAGICIAN LIKE JAY MATTIOLI.

At 18 years old, he was hailed by the International Brotherhood of Magicians as a "Champion of Magic", becoming one of the youngest magicians to ever receive this honor. Then in 2006, Jay was awarded 1st Prize at the Society of American Magicians International Stage Contest of Magic. Jay is one of only a few magicians in HISTORY to receive 1st prize in both of these international magic competitions.

More recently, Jay electrified the nation and stunned the judges with his appearance on NBC's #1 hit show "AMERICA'S GOT TALENT."

Jay's unique style obliterates the past concept of what people expect from a magician and is one of the few illusionists in the world who has truly brought magic up to date. The combination of hilarious, and jaw-dropping illusions along with a blend of Hip-Hop and Urban dancing has catapulted Jay into a field where he stands alone.

Decored in hip, vivid costumes, a carefully punked hair-do, and a vivacious assistant on his side, Jay performs magic with everything from live animals to levitating microphones as well as startling effects where Jay vaporizes his body in the blink of an eye!

Guiding a new wave in refreshing entertainment, Jay's magic has become a sought after act for vacation resorts, variety revues, corporate events, cruise lines and college universities.Organizations such as IBM, Morgan Stanley, Best Software, Inc., Disney Cruise Lines and hundreds more have chosen Jay's magic to electrify their guests and special events,...and so can YOU.

Packed with excitement, audience interaction, and a one-of-a-kind personality, Jay Mattioli will continue to delight audiences of the new millennium with a show that simply can not be missed!!